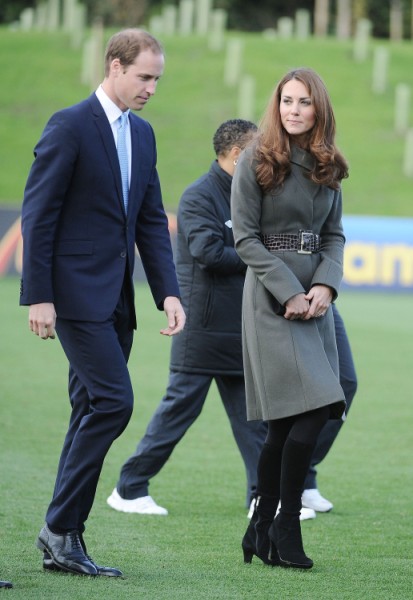 By now we all know the palace put the kibosh on the promotional tour for Pippa Middleton’s book. What we didn’t know was that Pippa didn’t go down without a fight. Apparently she even told big sister, Kate Middleton: “Your marriage to William is ruining my life!” Oh, Pippa, so dramatic. But I like this Pippa Middleton so much better, don’t you?

But why stop the book tour? Give her a publicist. Give her lessons. Anything! “Because the Royals feared Pippa would be questioned about Kate’s nude photo scandal, putting the whole mess back in the spotlight,” a source told the National Enquirer. “Worse, Pippa was told to keep her mouth shut when The Queen’s cohorts leaked phony stories to the press, spreading the scurrilous lie that Pippa herself had chosen to cancel her tour to keep the scandal from re-emerging! Palace officials stood firm and demanded that Kate personally break the devastating news. Extremely upset, she tried to persuade Prince William to intervene before her meeting with Pippa, but Hubby refused, saying it was an official matter that needed to be handled by her. Stressed and nervous, Kate did her awful duty – and Pippa broke down in tears! She begged Kate to plead for her again, and was shocked when told it was no use.”

I’m going to pretend this all happened because it’s awfully dramatic and everything I hope for in the royal family. So Kate had Pippa’s back? FINALLY! After a year of doing whatever the royal family wanted and basically shutting Princess Pippa out, Kate finally recognized that her one and only ally in that family is Pippa. Kate still lost but at least she tried. I’m sure Pippa doesn’t see that now but she will. Pippa’s got to be pissed that her book is getting raked over the coals by the media and that she’s getting highly criticized for failing her publishers. Let’s give her some time to cool off.

I thought Pippa was only to happy to step away from the book. I figured it was a I’ll scratch your back if you scratch mine thing with the Queen but apparently the Queen doesn’t scratch like Pippa. I wonder if the palace was ever going to OK the promotional tour. Do you think they used Kate’s scandal as an excuse to hold Pippa back? And how do you like how they basically made Kate deliver the news? If royal families have learned anything over the centuries it’s that people usually shoot the messengers even when asked not to. So they sold Kate out and Prince William did nothing to stop them. Are we surprised? I’d like to think William had his hands tied too. He’s known Pippa since she was a teenager. He probably loves her like a sister. He wouldn’t want her to get screwed in all of this. I’d like to think if he could have intervened he would have but the Queen made up her  mind and that was that. That’s how I choose to see all this because I refuse to hate Prince William yet so I’ll keep my eyes closed on his douchery.

But are Kate’s eyes finally open? She’s been the golden child of the royal family for the past year and she just got told to sit down. No, she got told to sit down and to like it. I’m sensing there still might be some bad blood in the air post-scandal.