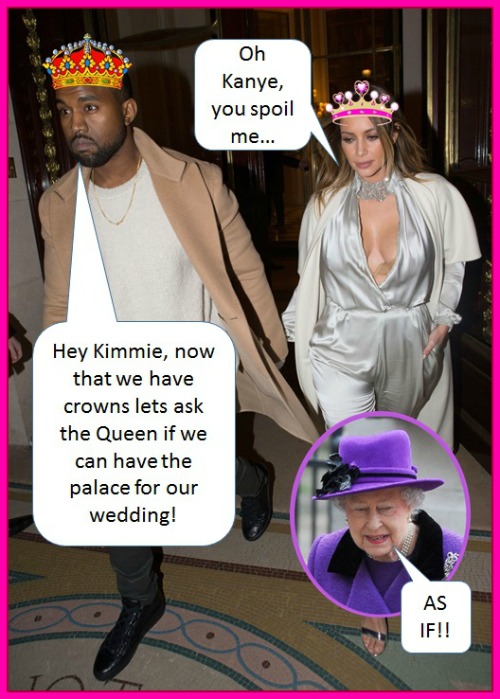 Kim Kardashian and Kanye West are officially getting married, everyone! Well, we always knew that they would get married, but they’ve set a date and everything. According to US Weekly [which means it’s true and which also means that Kim probably called their press office and gave them the details], Kim and Kanye will be walking down the aisle on Mary 24th in Paris.

It’s been seven months since the couple got engaged and clearly, they’re not wasting any time with the actual wedding. According to the report, guests for the wedding will be flown in several days beforehand. Apparently, the date also coincides with a meteor shower that’s predicted to happen, and I have a feeling both Kim and Kanye knew that. From everything we heard, they seem to want the most extravagant, over-the-top, and insane wedding possible, and getting married under a meteor shower in the City of Lights would definitely fit that scenario.

Although Kim recently stated in an interview that she wants the wedding to be a small and private affair, who does she think she’s kidding? There’s no way she’s going to be able to resist showing off, a.k.a. calling as many people as humanly possible to come witness her wedding. Plus, we already know that Kanye’s keeping Kim in the dark about a lot of the wedding details, and Kanye’s not exactly known for his subtlety. If they really wanted an intimate wedding, they would have kept the news out of the media, and gone somewhere private with a few close family members and friends without causing all this hubbub.

Are you guys excited to see whatever insane plans Kanye and Kim have put together for their wedding? Let us know your thoughts in the comments.