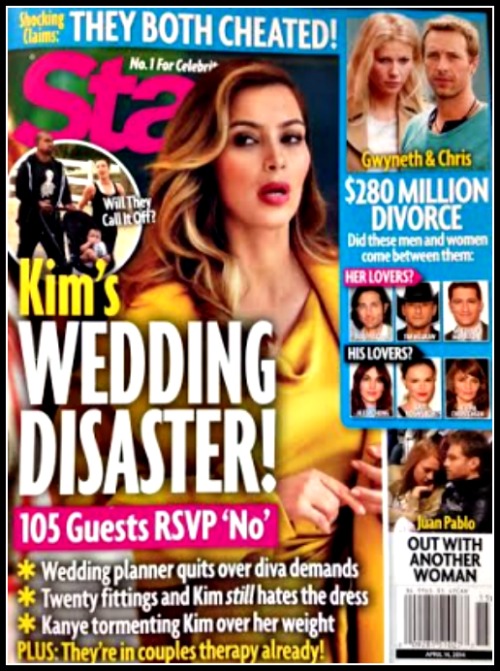 Kim Kardashian is reportedly freaking out over her upcoming wedding ceremony, and a source close to the reality TV star claims that she’s neither emotionally nor physically ready for the big day. And perhaps one of her biggest concerns has to do with the guest list, which seems to be getting shorter and shorter by the day after many top celebs have responded with a “No, we won’t be attending.” Yikes. Looks like Kim and Kanye better rally up some fans to attend the wedding and fill up those guest seats!

We’re not sure if Kim and Kanye actually invited these celebs (especially Michelle and Barack Obama), but I think it’s very true that celebs will be turning down an invitation to Kim’s wedding — either because they’re too busy or don’t want to be associated with a reality TV famewhore spectacle.

Another thing that has Kim freaking out . . . . She’s getting pre-wedding jitters and questioning whether or not she actually wants to marry Kanye West at all! Reports the mag, “Kanye’s egotistical attitude is a huge turnoff for Kim. She even says she doesn’t enjoy intimacy with him anymore.” She claims that he’s smothering her and is being way too controlling when it comes to their wedding plans.

Here’s the thing: I don’t believe that Kanye’s egotistical attitude is “suddenly” not sitting well with Kim. There has never been a moment in history when Kanye hasn’t been egotistical/controlling/annoying, so we have a hard time believing she’s feeling apprehensive about  marrying him for those reasons in particular. But who knows? Let us know your thoughts in the comments section below. We’d love to hear from you.