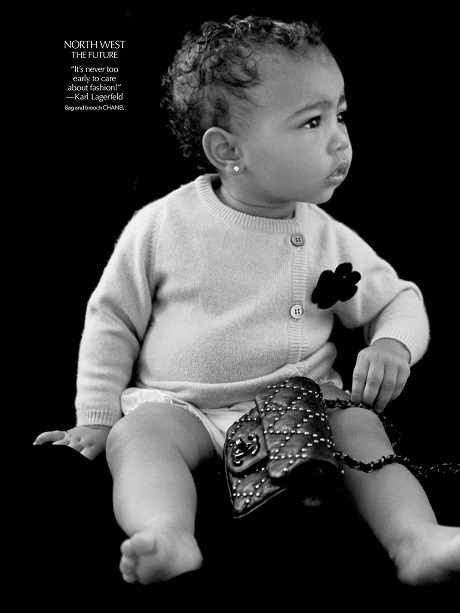 Does anyone else think it is ironic that Kim Kardashian and Kanye West refuse to let their one year old daughter North West be filmed for Keeping Up With The Kardashians, but they have no problem pimping her out for modeling gigs? On August 14th, the tiny celebrity made her modeling debut in the CR Fashion Book, making her the youngest person to ever be featured in the magazine.

In North’s picture, she appeared in a black and white photo dressed from head to toe in Chanel, including a tiny quilted Chanel purse laying on her lap. The magazine gushed that there is “a bright fashion future for the already famed daughter of Kanye and past cover star, Kim.”

According to the September 1st edition of OK! Magazine, North is apparently a chip off the old Kardashian block and already has her own sense of fashion and refuses to wear certain pieces. Right…because fourteen month old babies hand-pick their own designer outfits. It sounds like the rumors are true and Kim doesn’t spend half as much time with her daughter as she pretends to, because honestly believing that your one year old daughter has her own fashion sense is downright laughable. North West must be a baby genius.

OK! Magazine claims that, “Kim says Nori already has fashion un-faves.” And the tabloid includes a quote from Kim Kardashian, stating, “She doesn’t really like pink…and she doesn’t like prints.” Really Kim, did North tell you that? It really is sad that Kim is already pushing the tiny tot in to the fashion world. But, we all seen this coming a mile away. We should probably give her props for scoring her high-end fashion modeling gigs and not pimping her out to Babys ’R’ Us.