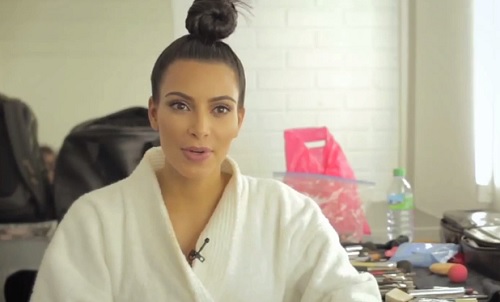 It’s very important that you understand Kim Kardashian doesn’t go around stomping on raccoons, or any other critters for that matter, with her high heels. In a new video interview with Paper Magazine, the mag that sent her big booty viral on an Internet-breaking spree, Kimmy sets the record straight. When asked about what’s the weirdest thing/rumor written about her, she responds, “That I was obsessed with killing raccoons and really weird animals.”

The Keeping up with the Kardashians star continues, “This person gave a fake police report, this whole story about how I took my high heels and would just stomp on them. It was the weirdest story I’ve ever read.”

Kim also reveals some more stuff in the brief video interview, including how she and Kanye West have taught each other to effectively communicate with their fans. Kim says that Kanye has taught (or maybe told?) her to establish boundaries, especially when it comes to her incessant postings on social media. Kim’s social media work never stops, but she does admit she’s not an active user of the Vine platform. While she does love watching the countless hilarious snippets on the app, she admits she’s not creative or funny enough to post her own unique vids.

Her favorite Vine, however, is “Broom, broom. Get out me car, mum!” and you should definitely check out her hilarious impression in the video below.

Phew, good to know Kim Kardashian isn’t the Stiletto Animal Killer we’ve all been wondering about.