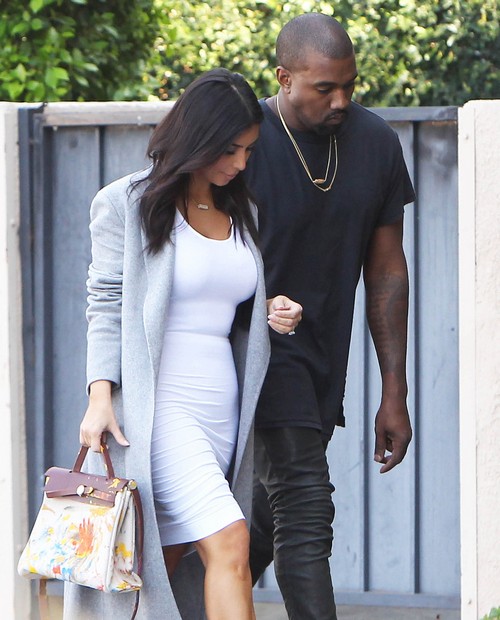 Is Kim Kardashian pregnant with baby number two? It’s no secret that Kim Kardashian desperately wants a little brother or sister for North West. The star has gushed on Keeping Up With The Kardashians that she couldn’t wait until she and her now husband Kanye were officially married so she could get pregnant again (not that a ring stopped her form getting pregnant the first time). It looks like Kim has finally gotten her wish, and she was spotted with what looks to be a baby bump on November 10th.

Kim and Kanye and her momager Kris Jenner were photographed heading in to her office on Monday in Woodland Hills, California. Kim, never scared to shy away from flaunting her curves regardless of whether she is pregnant or not, rocked an all-white skin tight dress, which made the extra bulge in her lower belly increasingly obvious. Kanye, who usually trails a few feet behind Kim, protectively walked by her side to ensure she wasn’t ambushed by the paparazzi or a crazed fan (another clue that she is pregnant).

Our Kardashian insider reveals that everyone in the family thinks that Kim is pregnant, but she and Kanye won’t confirm it. The source goes on to explain, “Kim is keeping to herself a lot lately, and shying away from major public events unless she is obligated to go, just like when she was pregnant with North. And, her eating habits are sporadic again, one minute she is claiming she is ‘eating clean’ and then the next minute she is inhaling a plate of pasta. Her sisters are certain she is pregnant, but they all think Kanye and Kim are waiting to make a big extravagant announcement, like on Christmas.”

Considering the fact that we knew Kim was trying to get pregnant, she appears to have gained weight only in her belly or has a baby bump, and her own sisters think she might be expecting – it’s safe to say Kim has a bun in the over. Kim and Kanye are rumored to be doing their own over-the-top Christmas card with baby North this year, perhaps the card will double as a baby announcement. Do you think Kim looks like she is pregnant again? What kind of crazy name will she and Kaye stick this baby with? Let us know what you think in the comments below!