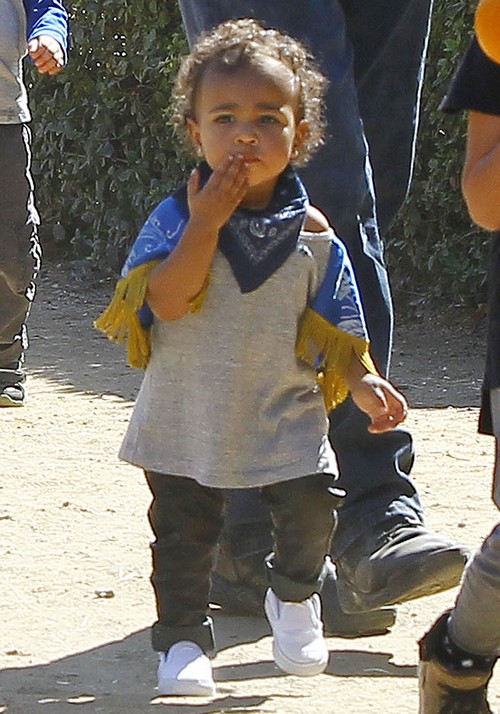 It’s hilarious how delusional Kim Kardashian and Kanye West are about their daughter, North West. First Kim Kardashian goes on the record and states that she wants North to make her own living when she grows up, even though she herself only gained a career after making a sex tape. And now, Kanye West apparently wants North to become the next Emily Dickinson, or the next Albert Einstein, or the next Chopin.

Forget Albert Einstein and Chopin and Dickinson, they should at least try to aim for North West NOT becoming the next Kim Kardashian. But just like everything else in Kanye West’s life, his delusions know no bounds.

A source tells Hollywood Life, “What they’re hoping for as parents is that [North] will find something that she loves doing every single day and, by default, make money from it. Whether it’s being a writer, a composer, an artist, a teacher, an inventor of the next big idea, whatever — it will never be work for her because she’s privileged enough to only do things that she loves and enjoys.”

Well, North West definitely IS privileged. She’s also spoiled, and will undoubtedly become more spoiled as she grows up. Kanye West isn’t going to deny his daughter anything, and she’ll end up exactly like her mother and aunts, or probably even worse. And just like all the other spoiled celebutantes out there, North West is never going to work a day in her life – even as writer, painter, artist, or god forbid, a mathematician or scientist. The next Emily Dicksinson, my foot. More like the the next Kim Kardashian, which is fitting since Kim Kardashian is her mother.