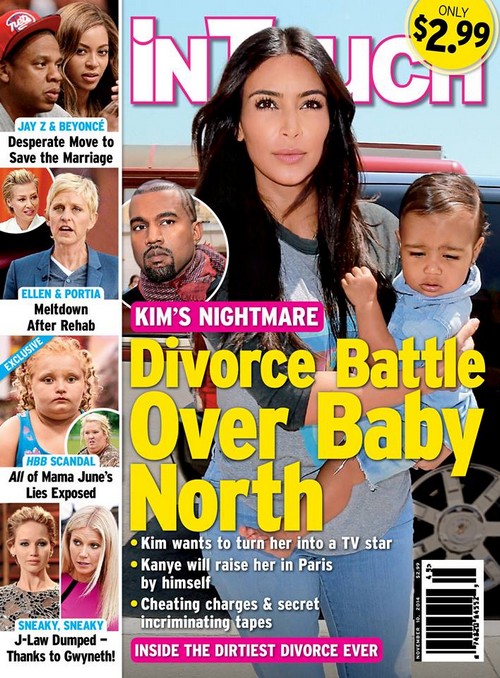 Kim Kardashian and Kanye West barely seem to acknowledge North West’s existence, so imagine my surprise when the cover issue of In Touch Weekly claims that Kanye and Kim are fighting (like they were fighting at the pumpkin patch) over North West’s custody. According to the reports, Kanye West and Kim Kardashian are divorcing [and trust me, that’s happening, whether it’s now or five years down the line], but the biggest point of contention in the divorce proceedings is North West’s custody.

Apparently, Kim [and by extension, Kris Jenner] wants to turn North West into a reality star. Of course she does. And Kanye wants to raise North in Paris, away from her famewhoring mother’s side of the family. Kanye probably imagines her as a little fashionista, and he and Riccardo Tisci can raise her together to rub it in Kim’s face. And Kim – well, I honestly would NOT be surprised to see Kim using North for fame fifteen years down the line. In fact, I wouldn’t even be surprised to see North launch her career the same way that Kim launched her own. I would hope that no mother would sell her own daughter’s sex tape to launch a media empire, but hey, it worked for Kris Jenner, didn’t it?

In Touch also has a new update on the Beyonce/Jay-Z situation, claiming that the two are still trying desperately to save their marriage. We called that divorce as imminent a long time ago, and we’re sticking with that.

Then, Chris Martin apparently dumped Jennifer Lawrence because of pressure from Gwyneth Paltrow. Puh-lease. You think Chris would ditch his ticket to Hollywood popularity? No, it’s Jennifer Lawrence who did the dumping, probably after seeing Gwyneth and Chris being cuddly and relationship-y.

Finally, Ellen DeGeneres and Portia de Rossi haven’t been having the best time dealing with their marriage after Portia’s rehab stint, and In Touch’s sources claim that their relationship is on the verge of imploding.

All in all, a regular week in Hollyweird.

Kanye West and Kim Kardashian look like they are fighting before departing on a flight at LAX airport in Los Angeles, California on October 26, 2014. Look at the faces of these two and let us know if they are happy or not!