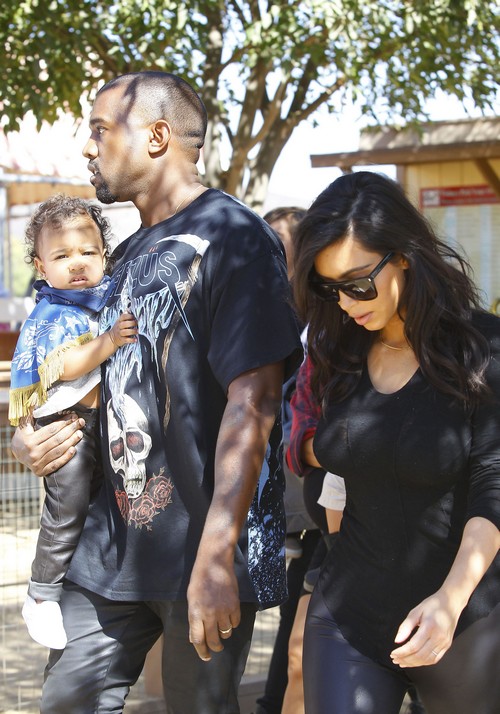 Kim Kardashian and hubby Kanye West were spotted on October 18th with their daughter North West at Underwood Family Farms’s pumpkin patch in Moorpark, California. Kanye and Kim were photographed looking miserable with Kourtney and her children and momager Kris Jenner. Onlookers at the pumpkin patch reported that Kim and Kanye were arguing during the entire outing, and their day of family fun was clearly not so fun.

So, what happened at the pumpkin patch that had the Kardashian family feuding? Well, according to our sources – Kris Jenner happened. An insider reveals that Kim and Kanye wanted to have a low-key family day with daughter North West and Kim’s sister Kourtney and her children. However, Kris Jenner insisted on tagging along and when they arrived the paparazzi was already waiting for them, they had obviously been tipped off.

It’s no secret that Kanye hates the paparazzi, and seeing them waiting for his family like vultures sent him in to a rage. Insiders reveal that Kanye knows Kris Kardashian tipped off the photographers, because she wanted to be photographed with Kim and Kanye and thought the scenic farm would be a great photo opportunity. Other tourists at the farm reveal that Kim and Kanye were arguing the entire time over Kim’s mom calling the paparazzi. And, you can tell by the looks on Kim and Kanye’s faces in the photographs that were taken that there is definitely some truth to the story. Ironically, Kris Jenner is all smiles.

You would think by now that Kanye would be used to his mother-in-law’s famewhoring tactics. It is a shame that North, Penelope, and Mason can’t enjoy a fun day at a pumpkin farm like typical children, but we have no pity for Kanye. When he married in to the Kardashian family, he should have been prepared to have Kim’s mom Kris turn every event in his life into a photo opportunity to drum up publicity. Do you think what Kris did was a low blow? Or should Kanye have expected nothing less from her? Let us know what you think in the comments below!

Kim Kardashian, her husband Kanye West, and their daughter North along with Kris Jenner, a pregnant Kourtney Kardashian, and her kids Mason and Penelope have a family day at Underwood Family Farms in Moorpark, California on October 18, 2014. FameFlynet

Update: The fighting continued after the couple took Nori home and went out for a movie date on Sunday. Kanye tried to smile a couple of times but Kim wasn’t having any of it. On another topic, Am I the only person who thinks that Kim dresses like a fool?

“Keeping Up With the Kardashian” stars Kim and Kourtney Kardashian head to their office on October 20, 2014 in Woodland Hills, California. Kim opted for a more traditional look today, after wearing a backless top and cutoff jean shorts for a movie date with Kanye yesterday. Pregnant Kourtney opted for a slimming all black look this morning.