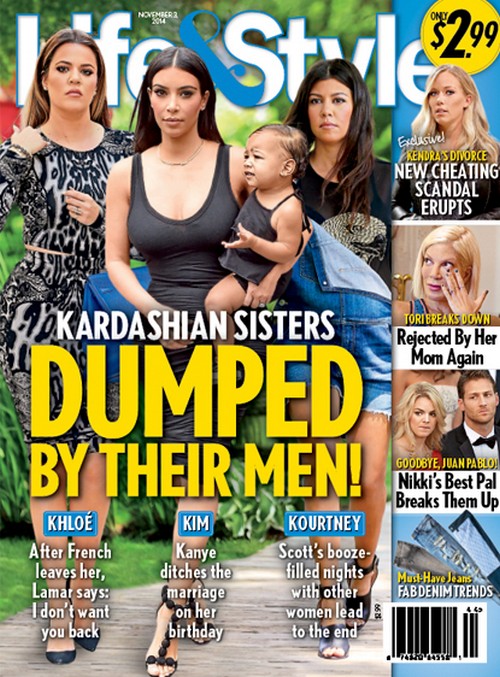 The Kardashian sister’s love live rumors are never uneventful and it’s difficult to keep track of Kim, Kourtney, and Khloe’s ever-changing relationship statuses. According to the rumors in the November 3rd cover of Life & Style Magazine, all three of the Kardashian sisters are single and ready to mingle. The L&S cover reveals that after French Montana left Khloe, Lamar informed her he didn’t want her back. Kim was supposedly tragically dumped by Kanye on her birthday, and Kourtney’s relationship crashed and burned due to Scott’s drunken endeavors with other women.

We’re not exactly buying that Kourtney, Kim, and Khloe are all living the single life. Kourtney and Scott’s tumultuous relationship is unpredictable to say the least, and considering Scott’s recent behavior there is a decent chance that he cheated on her. But, let’s be real, has Kourtney ever not taken Scott back? If they were broken up, they were probably back together before the ink dried on this week’s edition of Life & Style. As far as Khloe goes, when is the girl ever single? She may not be with French, or Lamar, but she was just spotted out to dinner with Wiz Khalifa. There is a decent chance that Kanye dumped Kim though, after his feud with her mother of the debacle at the pumpkin farm earlier this week. But, on her birthday? That’s even cold for Kanye.

This week’s cover of Life & Style Magazine also teases an exclusive article on Kendra Wilkinson’s alleged divorce, and claims a “new cheating scandal has erupted.” We’re not exactly shocked, any girl can tell you that if a man cheats once and gets away with it, he will do it again. Tori Spelling is “breaking down” … again. When is she not breaking down? And, Nikki Ferrell and Juan Pablo are apparently dunzo, thanks to Nikki’s mingling BFF.

So, do you think Kim, Kourtney, and Khloe Kardashian are all single? Do you believe that Scott cheated on Kourtney? Is there any doubt that she won’t take him back? What about Kim and Kanye? Let us know what you think in the comment section below!