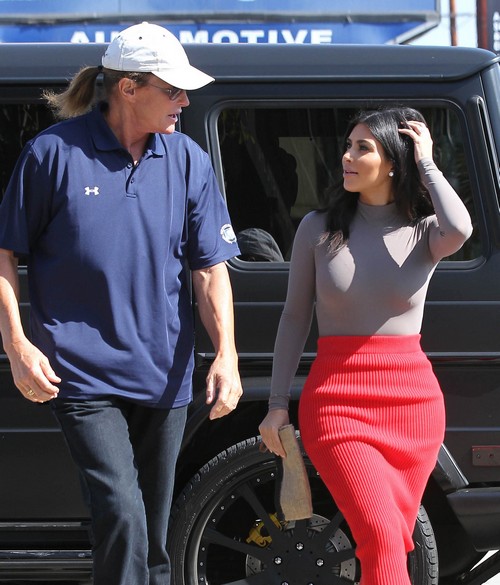 Kim Kardashian has accidentally let slip that she is pregnant with her second child, probably infuriating Kanye West and her family in the process [for different reasons]. So much for taking it slowly and letting the media speculation build. Kris Jenner would have wanted a slow media roll-out of the news, taking full advantage of rumors and the media interest, netting several tabloid covers in the process. Kanye West, on the other hand, still continues to harp on about his privacy, and would undoubtedly be displeased about Kim’s big mouth.

Anyway, Kim recently sat down with Pixiwoo, a UK beauty site, about her fashion and street style. When asked about the choice to wear maternity clothes, Kim explained, “I wore my regular clothes and I would just buy a size up. I don’t know if I would necessarily do that this time around…Pregnancy style is hard.”

Uh-oh. ‘This time around’…? I think we all know what that means, don’t we? Kim Kardashian might be playing coy, but her statement couldn’t be clearer. However, Kim is still in the early stages of her second pregnancy, IF she is actually pregnant. She recently uploaded a picture to Instagram of her wearing a teeny corset, and I don’t think any pregnant woman would try to put her stomach or unborn fetus through that. Then again, I wouldn’t put anything past the Kardashians. Maybe this is just some elaborate ruse to cover up the truth, perhaps in an effort to avoid the media ridicule that Kim was faced with during her first pregnancy.

What do you guys think? Is Kim Kardashian pregnant for the second time? Let us know your thoughts in the comments below.

Update: Kim Kardasian’s rep has denied that she is pregnant (Page Six).