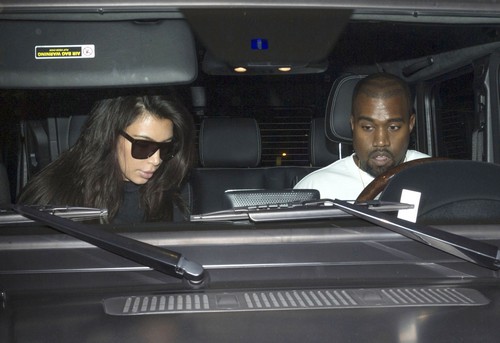 Kim Kardashian has admitted that she and Kanye West are ‘trying’ for their second baby, a.k.a trying to upstage Kate Middleton and news of the royal pregnancy. However, we hadn’t received much other evidence to support Kim Kardashian pregnant until Kanye was pictured taking Kim to the doctor’s office.

Now, it could have just been a routine checkup, but why wouldn’t Kim have done that herself? And since North West was nowhere in sight, we can assume that it wasn’t a pediatric checkup either.

Besides, what could be so urgent that the doctor’s office was literally the first stop they made after getting back from Kanye’s Australian tour? Neither of them looked particularly sick in the photo set, but Kim is sporting a tell-tale baby bump, albeit a very small one. Plus, she does seem like she’s put on a few pounds, despite her professed commitment to working out and eating healthy. Either she aint telling the truth, or there’s another reason for her weight gain – success in creating Baby #2 perhaps?

Now, no matter what Kim continues to say, I can guarantee you that she doesn’t want to face the media ridicule of another pregnancy. But Kanye West wants another baby, and Kim’s entire life revolves around pleasing Kanye. And this way, she can keep her place in the media spotlight, with the press constantly guessing about her pregnancy status. If she is pregnant, she won’t admit it for another few weeks, at least. And then, she’ll make it so that she manages to upstage every other bit of news out there.

Besides, I very much doubt it was a coincidence that the paps managed to find Kim and Kanye during their doctor’s appointment. Kim totally knew that the media would jump to conclusions, and it’s exactly what she wants us to think.