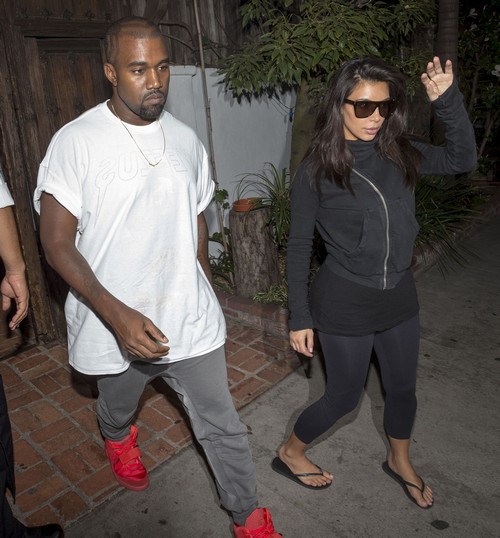 Oh, Kim Kardashian pregnant with a second child is a scary thought. The reality star just can’t stand the idea of someone else stealing the headlines, can she? She recently admitted on Australia’s Today Show that she was ‘trying’ for another baby with Kanye West. In Kardashian speak, that’s basically Kim admitting that she’s already pregnant and that she wants the focus on her, dammit!

See, our sources have been saying that Kim has known that she was pregnant for a few weeks, and she was initially going to keep quiet about it and go for a big reveal. And then Kate Middleton‘s royal pregnancy happened, which means that nobody would have given a rat’s ass about Kim’s pregnancy or non-pregnancy. So she decided to use any means at her disposal – including her unfortunately wide-reaching PR arm – to let people know that she, too, *might* be pregnant soon.

After what she went through with her first pregnancy, I guess you can’t blame her for playing it safe this time around. Kim Kardashian with her mammoth baby bump was called a whale, a pig and every other name under the sun – some due to her own ridiculous fashion, but also because she continued to famewhore herself out, even in the last throes of her pregnancy. And even if she hadn’t intended to do that this time, she just couldn’t handle not being in the spotlight.

So what does she do? Well, she admits that she and Kanye have already started trying for another baby, a.k.a. she will announce her pregnancy very soon. And since that still hasn’t done much to get her back in the headlines, she’ll probably start showing off her baby bump soon enough.

Update: reports are emerging that the day after Kim Kardashian and Kayne West returned from Australia they rushed to see the doctor together without North West. This certainly is the behavior we expect from a pregnant Kim and concerned Kanye!