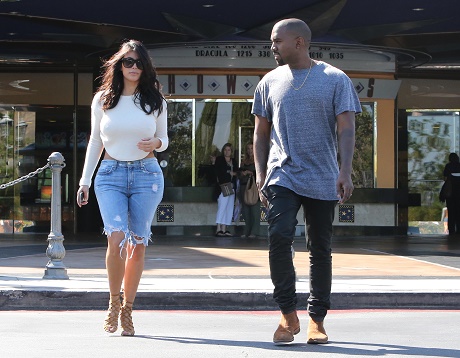 Is Kim Kardashian boycotting Kris Jenner’s iconic Kardashian family Christmas card? The holidays are almost here, which means it is almost time for the Kardashian Family’s annual over-the-top trash-tastic Christmas Card. Every year we have come to expect Kris Jenner to gather all of her fledglings in nearly-nude apparel to pose for a family portrait for their Christmas card. But rumor has it that, this year, the family portrait will be missing a few faces.

Kim Kardashian is currently in a major feud with her momager, Kris Jenner, and her hubby Kanye is so furious with Kris that he has banned Kim from making amends with her. The straw that broke the camel’s back occurred last weekend when Kris crashed Kim and Kanye’s family outing at a pumpkin farm with baby North, and called the paparazzi and tipped them off, turning what was supposed to be a low-key day into a photo-op.

Kanye is so sick of Kris Jenner and her fame-whoring tactics that insiders reveal he will not let Kim or North appear in the annual Kardashian family photo and he plans to have one of his own. Our Kardashian insider claims, “Kanye is so fed up with Kris right now, he doesn’t want her to make another dime off from Kim or North. He informed Kris that he and Kim are doing their own family Christmas card this year and he is already planning to make it so over-the-top that Kris’s Christmas card looks like child’s play. Kris is obviously livid because she makes a ton of money off from their elaborate family portraits every year.”

It looks like Kris and Kanye are in a full-blown war. Messing with her iconic Christmas card is fighting words! On the bright side, we will get to see two super cheesy and trashy Christmas cards, instead of just one. Who do you think will win the battle of the Kardashian Christmas cards? Kris or Kanye? Let us know what you think in the comment section below!