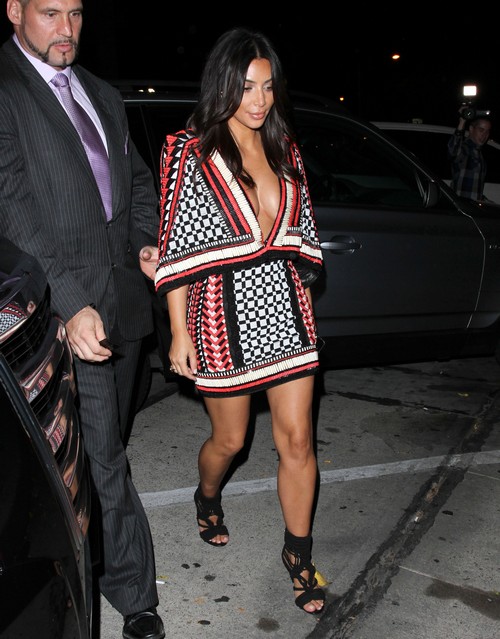 Kim Kardashian looks like a constipated unicorn. She has two brain cells, a tub of frozen Botox in the fridge, a husband with a God Complex and an Amazing Child. La dolce vita. Who wouldn’t be constipated? At last Sunday’s VMA’s, Kim’s facial expressions ranged from “I.am.so.hawt” to “I don’t even know what’s going on anymore! Ohmygaaad!”

No, Kim-K didn’t slip a little Kim-K into her pants. Famous people don’t do the whole “toilet thing” – it’s one of the reasons Gary Busey lost his mind. Kim-K almost expelled her internal Madame Tussauds when producers placed her in close proximity to Rita Ora.

Your point being? Kim-K blames Rita for Rob Kardashian’s “emotional issues”. Rita and Rob (not a sitcom) dated for a while in 2012. The relationship struck an ice berg and went down like Bruce Jenner’s face. First rule of dating a Kardashian: Don’t break up with a Kardashian.

Kim-K “politely” requested a different seat. Producers scrambled like a group of flu-ridden Nick Nolte fans and found her a spot close to Kendall and Kylie Jenner. One of the sources close to the situation leaked, “Kim is an extremely popular celebrity. She gets what she wants. We’re not allowed to move celebrity reservations. I could have lost my job, but Kim didn’t care. She threatened me instead.”

Rita’s friend also expressed her disgust at Kim-K’s behaviour. “Rita was so excited to see Kim. She bought a teddy bear for North West and couldn’t wait to give it to her. Kim got up and left when Rita arrived. I’ve known Rita for seven years. She is an extremely sensitive person. The incident had her in tears! Kim is a miserable and immature bitch.”

Preach! Kim-K needs some green tea in her life. She’s a stuck-up whack job with a shitty attitude. Go cry on a toilet you fool!