Kim Kardashian Uses ‘Us Weekly’ To Showcase Her Skills As North West’s Mother, Trying PR To Fix Her Image (PHOTO) 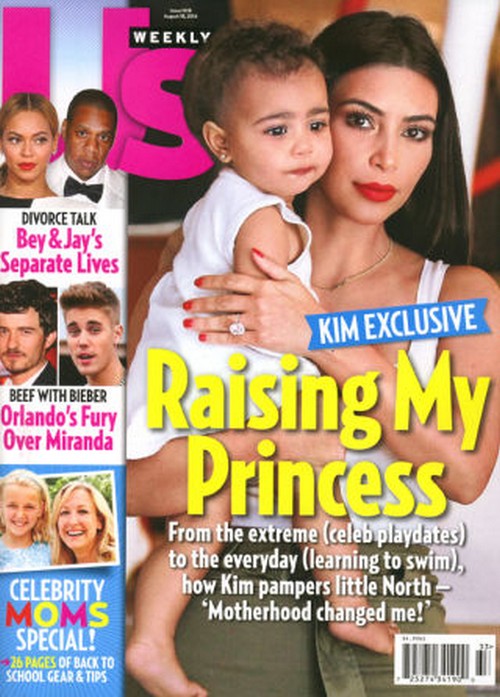 After the numerous reports discussing Kim Kardashian‘s terrible parenting skills, I guess the word finally got to Kim. You’d think that she would have realized it already, especially since she and Kanye West are constantly abandoning North West and jet-setting around the globe on unnecessary vacations. However, Kim is now covering US Weekly’s latest issue, and surprise surprise, she’s holding North West in the picture.

The ‘exclusive’ probably comes from Kim Kardashian herself, no doubt begging the tabloid for a chance to clear up her image. The feature focuses on Kim’s skills as a mother, her daughter’s celeb play dates, and how Kim ‘pampers’ North. Basically, it’s just a series of photos from Twitter and Instagram allowing Kim to show off how fancy North’s clothes are. Seriously, she sets out to correct her image and she just makes it worse – classic Kim Kardashian.

US also has a story about the biggest scandal this week – we are talking, of course, about the now infamous Justin Bieber and Orlando Bloom fight. We already know that Justin and Orlando were fighting over Miranda Kerr, and how Justin flaunted his affair with Miranda in Orlando’s face. Justin is a douche, sure, but why did Orlando have to put himself down at Justin’s level? Now he’s forever going to be associated with Justin’s punk-ass antics.

In other non-news, Beyonce and Jay-Z are avoiding each other, sleeping in separate rooms, and pretty much done with their marriage. Considering that they have a child together and still have a tour to conclude, I’m not sure how they’re managing to avoid each other so completely. But maybe they have their minions send each other messages instead of meeting face to face. Regardless, I think we can say with some certainty that an official divorce announcement is just days or weeks away.