Kim Kardashian Still Desperate For Jay-Z And Beyonce’s Friendship – Believes Delusion They Were Planning To Attend Her Wedding! 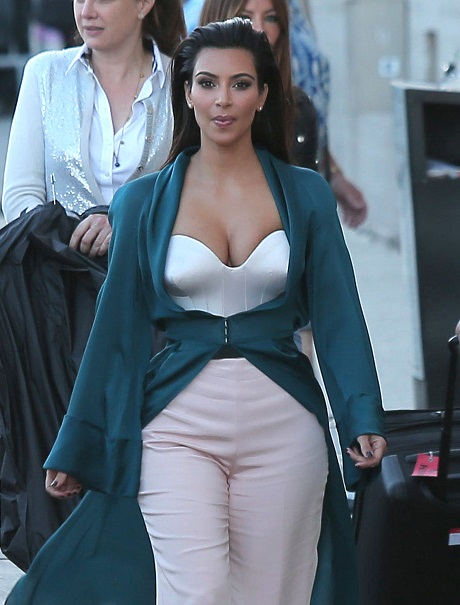 Kim was recently on Jimmy Kimmel Live, and as befitting a reality star/famewhore, Kim spent most of the time there talking about her wedding. She opened up about how she and Kanye West had decided to engrave their guests’ names into the marble tables they were sitting at. But when Jimmy said that sounded like a good idea, Kim said that ‘someone’ ruined everything when they canceled at the last minute, throwing the whole engraved table nonsense into chaos.

Kim explained, “It was somebody canceling last minute and their name was engraved. We tried to put white paint and cover the name.” Yeah, she’s probably actually talking about some C-list or D-list celebrity, but she’s making it sound like Beyonce and Jay-Z, right? I mean, why hold back the name otherwise? Why not just say it? She had no problem dissing her own brother, Rob Kardashian, for missing her wedding. So why not follow through with that and call out everybody else who missed her wedding?

But, of course, Kim’s obsession with Jay-Z and Beyonce would prevent her from saying anything mean about them, especially in public. She desperately wants to be Beyonce’s friend, and even though Jay-Z and Kanye are close, we know there’s no way that Beyonce will ever degrade herself to becoming Kim’s friend. Nice try, Kim, but we know that Beyonce and Jay-Z were never going to make it to the wedding.

Who do you guys think Kim was referring to? Let us know your thoughts in the comments below.