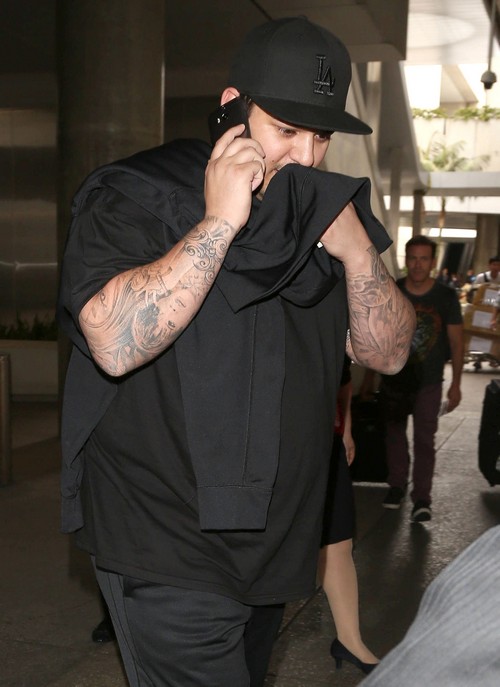 “We’ve all got each other’s backs.” Rob Kardashian probably regrets ever saying those words when speaking of life with his famous family during an October 2013 interview with the Wall Street Journal. At the time, he was happily sharing his joy of designing socks for his Arthur George line. Many things have changed in the past few months, however, and it all came to a head in Paris this weekend when Rob learned that each of his family members have no one’s back but their own.

Despite not wanting to attend his sister Kim Kardashian’s wedding to Kanye West in the first place because he thinks he’s too fat, Rob grudgingly made the trip to join his family after Kris Jenner laid down the law. Rob is not that fond of Kanye West in the first place (who is?), he just deals with him. Beyond that, he really just didn’t want to participate in the spectacle that his egomaniacal sister and hubby would call their “special day.”

Rob doesn’t have much faith in the institution of marriage in the first place after witnessing his father Robert Kardashian and mom Kris Jenner divorce, Kris and Bruce Jenner’s separation, Khloe and Lamar’s divorce, and Kim’s two divorces and wedding to Kris Humphries that was an embarrassing media ploy gone bad. He’s heard the things Kim has said about Kanye during private conversations and knows that she is definitely not in love with him. Kim has ulterior motives and Rob thinks that the level his family will go to for money, fame, and relevancy is utterly sick.

Rob became depressed over several challenges he’s faced over the last couple years. He was very close to Lamar Odom and seeing his downward spiral and divorce from his sister hit him hard. “Rob really misses Lamar, he was like a big brother to him,” a source shared with the MailOnline. He has had to endure the separation of Bruce and Kris, and lost the love of his life Rita Ora after it was reported that she cheated on him.

Beyond that, Rob has not only been struggling with weight gain, he is desperately trying to find his place in the family while vying for the slightest bit of attention from his mother, now that the men he was closest to are all gone. Kris couldn’t be bothered with Rob because he didn’t let her call all the shots. She basically threw her hands up when he turned down her attempts to get him weight and hair loss endorsement deals. Rob is dealing with real pain, and his own mother is trying to negotiate a business deal out of it.

He sees his entire family as greedy and superficial, and believes they’ve all turned their back on him because he doesn’t fit into their mold. To make matters worse, he is really disappointed in the direction Khloe has gone with her life, now dating French Montana, and thinks it is pathetic that even youngest sister Kylie is getting facial enhancements (her lips are now HUGE) yet denying it to the media. Kris is idly standing by as her family becomes one big business deal, and she has no problem with that.

Having this mindset before he even landed in Paris already had Rob feeling pretty apprehensive about the whole over-the-top event. So when Rob had heard that Kim was putting him down about his weight behind his back, Hollywood Life revealed a blowout fight between Rob and Kim ensued with the family, of course, taking money-maker Kim’s side. Since Rob cannot do anything “for them” or for the brand, and doesn’t happily go along with his momager’s plans, he is really just more of a nuisance to them. He knows it and that was all it took to send him packing, arriving at LAX on Saturday only to be met by several photographers asking why he wasn’t at his sister’s wedding. Rob didn’t respond, but actions speak louder than words, and I think we all know where Rob’s head is now.

Once back in LA, several media outlets confirmed that Rob’s first call was to Lamar. He knew he could count on Lamar to understand and actually listen to him and be there for him. Given Rob’s current mindset about his family, he may just act on some of the offers he’s received to pen a tell-all about the family. Rob knows all the dirt on the family, more than anyone else close to them. He could make a fortune on exposing his superficial family, but that is not his motive. Rob actually hopes that if he did write a tell-all about the family, it may expose them for who they really are, destroying the brand and empire so they could all live normal lives again. Rob cannot stand to be around them because everything is staged and set up for the cameras. Rob used to be loyal to his family because he believed that loyalty would be reciprocated. He found out the hard way that that simply is not the case, and he is both hurt and angry about it.

Deep down, he just wants his family back. So, while a little revenge may feel good for all the heartache his family has caused by neglecting him and torturing him about his weight, Rob would love to see the Kardashian empire crumble, forcing his family to go back to who they were before Kim’s sex tape catapulted them into the spotlight. Writing a tell-all could be the answer for Rob, and it would certainly mean a windfall for Rob and some fortunate publishing company.

What do you think CDL’ers?? Should Rob share the family’s dirty secrets by penning a tell-all? Does he have a right to be angry with them? Is it just “tough love” or are his sisters and mother only concerned with how his image affects their brand? Weigh in below.