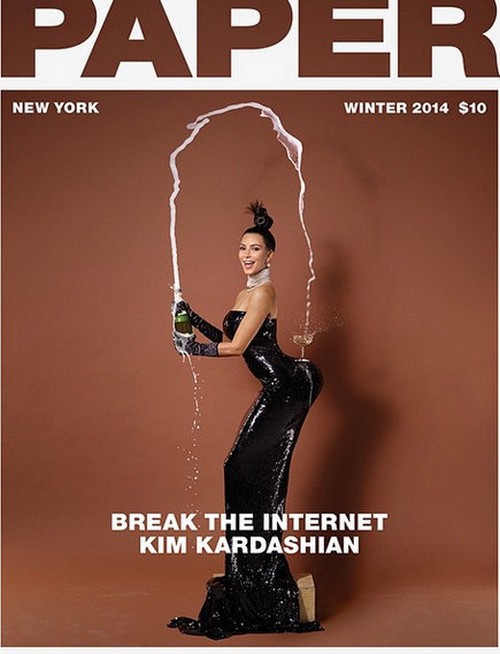 Kim Kardashian might sell basically anything that her name is attached to, but the makers of fine champagne all over the country think that she is marketing poison. She has sold everything from women’s wear to toilet paper – along with her high-priced sex tape for Vivid Entertainment. When champagne makers caught wind of Kim Kardashian’s butt being used to pimp out some high cost bubbly on Paper magazine, they quickly ran in the opposite direction.

As you know, Kim appeared buck naked on the cover of the winter issue of “Paper” magazine. She also showed off her boobs and “peekachu” (as Chelsea Handler calls it) in the pages of the newest issue of the publication. Apparently, when re-creating the 1976 Jean-Paul Goude champagne photo, champagne brands were scarce. According to sources, the bottle in the cover photo is obscured because the bubbly brands did not wish to be associated with the reality star.

“Paper” magazine reached out to several high priced champagne brands to sponsor the issue, but they all gave Kimmy K. a big “thanks, but no thanks” before snubbing their noses at her. She’s a high profile sex tape star who turned pimping herself out into a business – could you really blame people for shunning her with regard to advertising? There aren’t many classy brands out there who would want to be associated with Kim and her ilk…

Source say that the magazine “shopped around to all the Champagne brands to be a sponsor, to be the Champagne bottle in the image…and ever one passed. It’s in poor taste.”

A rep for the magazine said, “Ads for the issue were shopped and presented to brands, liquor and otherwise. It was never shopped as a Kim Kardashian cover issue for purchase.”

The magazine’s editor, Kim Hastreiter said, “How do you bring a new point of view to the woman who is seen by most on a daily basis? She put her iconic image in the hands of a master, and these gorgeous images show this. Have you ever seen Kim Kardashian with such a HUGE smile on her face?”

Yes, we have….it was when Ray-J basically used her as a toilet.