Kourtney Kardashian Walks Out On Scott Disick – Sick And Tired Of His Pathetic Drunk Behavior! 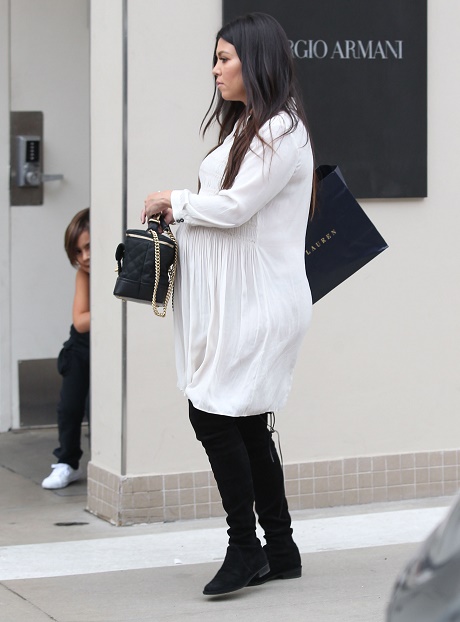 Kourtney Kardashian finally walked out on Scott Disick – and it’s about time! Scott Disick’s drinking and boozing was getting out of hand, and his reliance on alcohol started to get to the point where it was no longer just a concern for him, but for his children as well. I think Kourtney initially cut him a lot of slack because of the sudden death of his parents, but unfortunately, that soon devolved into a legitimate alcohol and drinking problem.

A source close to Kourtney & Khloe Take The Hamptons told Radar Online, “She simply cannot deal anymore! She took the kids over to her girlfriends house for two days last week.” And keep in mind, this is 8 months pregnant Kourtney Kardashian. The same source adds that Kourtney is trying to ‘hold it together‘ for the sake of the holidays and for her unborn child, but she’s been wavering. And meanwhile, Scott Disick continues flying out to Las Vegas as much as possible, never mind that his baby mama is about to give birth to his child. Partying and alcohol has already clouded his brain, and right now, the only thing on his mind is how to get drunk faster.

We’d also gotten some previous reports alleging that Scott Disick’s drinking problem was being played up for the sake of ratings, but I’d like to think that not even the Kardashians would be that cruel. I mean, I’m sure that Kris Jenner has leaked tidbits here and there, but nobody manipulated the drinking into taking place, and nobody forced Scott Disick to start bingeing booze. Even though he may have had legitimate reasons to start drinking, in the end, he has no one to blame but himself for letting it get this far. And it’s good that Kourtney finally got the guts to throw him out – maybe it will make him see some sense.