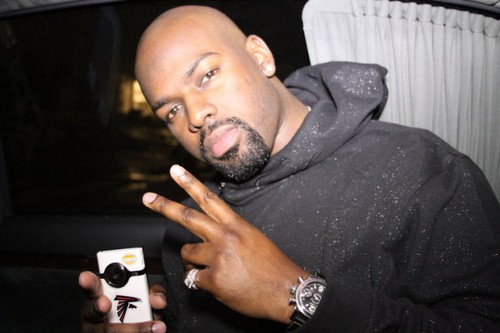 Kris Jenner and her cougar ways landed herself a new boyfriend recently, 33-year-old Corey Gamble. Kris quickly told everyone that she was ‘blessed’ to be with Corey, but is that the truth? In Touch Weekly has managed to acquire evidence and court documents that show Corey’s former girlfriend, Atlanta Exes star Sheree Buchanan, filing for a temporary restraining order against him in 2010.

The order was reportedly filed under Georgia’s stalking statue, with Sheree telling In Touch that Corey would often follow her around the city and to her home. Sheree told In Touch, “He would just show up at my house and come inside. I had to change my locks because he’d managed to somehow get a key.”

Sheree also warns against Corey Gamble’s obsession with money and fame, which we could have spotted from a mile away. Kris Jenner – and for that matter, most of the Kardashians – are excellent at landing boyfriends who seem to use them for money and fame, and this is nothing different. Why else would a 33-year-old dude be dating a 59-year-old woman?

Sheree says as much, adding, “I know Corey. He’s all about power and money and will do whatever it takes to get it. He sees the Kardashians as media’s first family.”

Ugh times a million. Even if we don’t want to admit it, the Kardashians are technically the media’s ‘first’ family, albeit a reality famewhoring first family. That means that gold diggers are always sniffing around the Kardashians, and this Corey Gamble is a gold digger, clear as day. It was excruciatingly obvious when he started dating Kris Jenner that he was just in it for a quick boost to his profile, but I’m pretty sure Kris Jenner already knew that. That woman is way too manipulative and evil to be dumb, especially about this kind of stuff. So if she knows he’s after her money and fame, and he knows that he’s after her money and fame, what’s the problem?