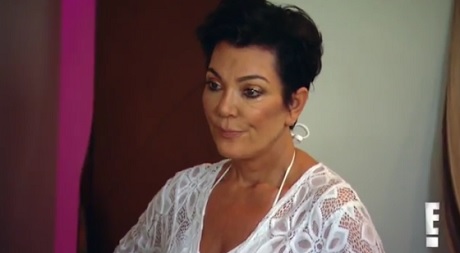 In a recent Keeping up with the Kardashians clip, Kris Jenner breaks down and gets emotional, saying that she can’t stand seeing Rob Kardashian in such a bad place. It’s quite clear that she just wants him to find a better state of mind and, I’m sure, a better state of health. In the clip, Kris talks with Kim, who, like always, seems utterly perplexed as to why (and how) some people can feel so intensely and greatly for other people (ugh).

She wonders why Khloe wants to head home and leave their vacation and rush to Rob’s side, who, at the time of the vacay, was all alone back in L.A. Kim wonders why everyone needs to treat Rob like a baby. After all, he’s an adult, she says.

In the clip, Kim also admits that she’d never want to have a bunch of kids because it would just get exhausting worrying about their emotions and current states of minds all the time. Yes, Kim, that is what being a parent is. And, remember, darling…you are also a parent. Remember that little baby nugget you recently gave birth to? What was her name again? Oh, yeah. North West.

Kris says that she sometimes feels “the weight of the world is coming down because” she’s “trying to micromanage everything.” Kris says that she thinks Khloe feels the same way, somehow responsible for her younger brother. “It’s the worst feeling in the world when one of your kids isn’t in a good place,” she adds.

Later in the clip, Kim gets a bit more empathetic and admits that it must be very painful for Khloe to watch Rob go through his current struggles, as the two have always had this very special bond, moreso than any of the other siblings.

Towards the end of the clip, Kim says that Khloe, after having gone through the Lamar Odom situation and now dealing with her brother’s emotional turmoil, deserves some time alone. Kim says Khloe should take some time to grieve and be selfish, for once, and not worry so much about others.

What do you think about Kim and Kris’s rather emotional conversation? Leave your thoughts in the comments section below!