Rob Kardashian Spirals Out Of Control, Gains Weight: Copes With Emotional Troubles By Eating And Loading Up On Drugs! 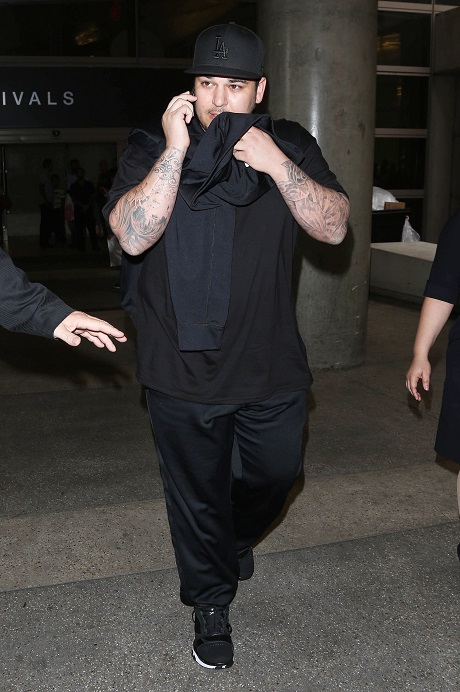 Rob Kardashian is reportedly dealing with his weight gain and depression by turning to narcotics, according to sources close to the reality star. As we know, Rob missed his own sister’s wedding because he apparently didn’t want to be photographed, but now sources are attributing Rob’s absence at the wedding to his reliance on prescription drugs and alcohol.

The reports suggest that Rob’s weight gain and emotional problems are all due to depression, and the way that Rob’s been battling his depression has been through eating non-stop and taking prescription painkillers. According to In Touch Weekly’s sources, “He’d just lie around his place smoking weed, doing drugs, watching movies and eating. He said he ‘needed’ the pills.” The source also claims that in addition to all the prescription drugs, Rob’s also been drinking too much of ‘Sizzurp’, the prescription-strength cough syrup that’s also insanely addicting.

Basically, Rob’s problems continue to get worse by the day, and his family’s clearly not doing much to help him. Sure, his sisters mention him in interviews and claim that they miss him, but shouldn’t they force him to go to rehab or in-patient therapy if his problems are really this bad? I wouldn’t consider massive weight gain, depression, and an addiction to prescription drugs anything to gloss over, but that’s exactly what his family seems to be doing right now.

Unfortunately for Rob, it’s only going to get worse if he keeps continuing on the path that he’s on right now. Depression and drugs are a cycle that feed into each other, and Rob’s only hope is to get himself properly treated and medicated – not illegally turn to Xanax and painkillers to help him get better.