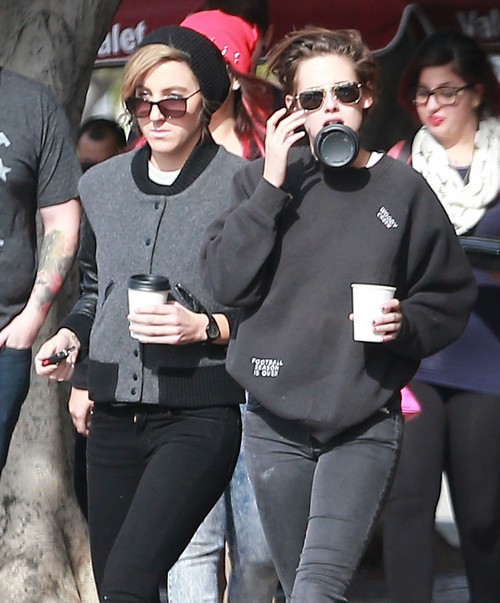 Robert Pattinson and FKA Twigs are causing Kristen Stewart pain – KStew loves Robert but hates FKA Twigs and what she is doing to he ex-boyfriend. Despite the endless lesbian rumors that plague Kristen Stewart’s relationship with her BFF Alicia Cargile, and the photos of the two together, we all know the truth. Kristen Stewart has been single for the past two years not because she’s been having a secret lesbian relationship with her best friend, or because she’s been having an undercover romance with some hot co-star. No, she’s been single because she still loves Robert Pattinson, and more and more, it’s starting to look as though she simply hasn’t been able to move on.

Kristen was recently photographed in Los Angeles getting coffee with Alicia Cargile, and the timing is certainly curious – despite Sony actively campaigning for an Oscar nomination for her, Kristen hasn’t landed on any of the awards season nomination spots just yet. However, that is currently the least of Kristen’s worries, according to sources. No, apparently, Kristen is still moping over Robert Pattinson’s new romance, with sources adding, “She’s convinced that this is just a fling. [FKA Twigs] will grow tired of Rob within half a year.”

What have we been saying? FKA Twigs is clearly just using Robert Pattinson for his name, fame, and career, and as a result, her own career has just been boosted into the stratosphere. Even if FKA Twigs and Robert Pattinson have a genuine romantic connection [two-sided being doubtful], it’s not the type to last when one side of the relationship is so much more professionally successful than the other – especially in Hollywood.

Either way, Kristen must have confided in Alicia that she still hates FKA Twigs and she still loves Robert Pattinson – which is what the tabloids have been saying for weeks anyway.

What do you guys think? Could Kristen still really ‘hate’ FKA Twigs and still ‘love’ Robert Pattinson? Does that make her petty or romantic? Or both, really? Let us know what you really think in the comments below.

Update: Sadly certain frustrated and rude self-styled gossip monitors publish nonsense on a regular basis pretending that they know exactly what celebs say and think – generally using anonymous sources! We wish they would spend their time trying to find news rather than putting other sites down.

FameFlynet: ‘Twilight’ actress Kristen Stewart enjoys lunch and coffee with her former assistant-turned-bestie Alicia Cargile on December 14, 2014 in Los Feliz, California. Although Kristen has denied any romance with Alicia, the pair have been spending a lot of time together while Stewart’s ex Robert Pattinson has moved on romantically with singer FKA Twigs. Sources close to Kristen claim that she “is convinced this is just a fling. [FKA Twigs] will grow tired of Rob within half-a-year.”