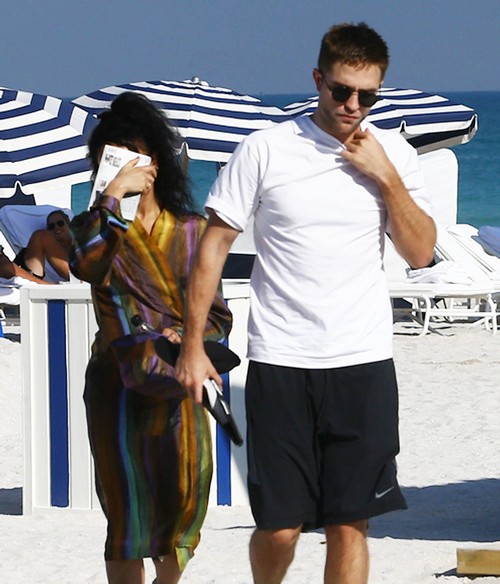 Is Robert Pattinson trying to leave the Kristen Stewart and Twilight era of his life behind? Is this why he is dating and promoting FKA Twigs? Even though all the current reports claim that Robert Pattinson is head-over-heels in love with FKA Twigs, our sources are telling us there’s a bigger plan afoot. While Rob and FKA reportedly do find each other very attractive and are enjoying dating each other, their relationship has become more of a business arrangement than anything else. Sources close to the couple claim that Robert Pattinson knows full well how his fame is helping FKA Twigs’ career, but that both of them realize their relationship isn’t sustainable – especially if they continue the famewhoring at this level.

Basically, both Rob and FKA have been using the media to their advantage for the past two months. Even though FKA Twigs doesn’t outright call the paparazzi, she doesn’t have to – there are enough ‘sources’ that will do it for her. And she gets a huge boost to her career in the meantime, all the while coming off as the hippie chick that managed to win Rob’s heart. Of course all the Twi-hards are going to flock to her shows to see their beloved’s new girlfriend, and her music gets the exposure that so many other artists can only dream of. In the end, FKA Twigs definitely benefits the most out of this relationship, but guess what? FKA also helps Robert Pattinson leave behind the Twilight and Kristen Stewart era, and separate him from the stench of his past. Whatever else she may be, there’s no denying that FKA Twigs is badass, and she makes Rob look super macho to all of his friends and colleagues. There are people that still view Rob as a pretty boy/sparkly vampire, and FKA Twigs’ association could remove that image.

Granted, there’s a ticking clock on this relationship, and sources tell us that Rob and FKA both know that. They’re enjoying having fun for now, but they both realize that one of them is bound to get tired of the charade and end the ‘relationship’. It’s only a matter of when that happens, and who decides to cut ties first.

What do you guys think? Who will initiate the Robert Pattinson and FKA Twigs breakup first?