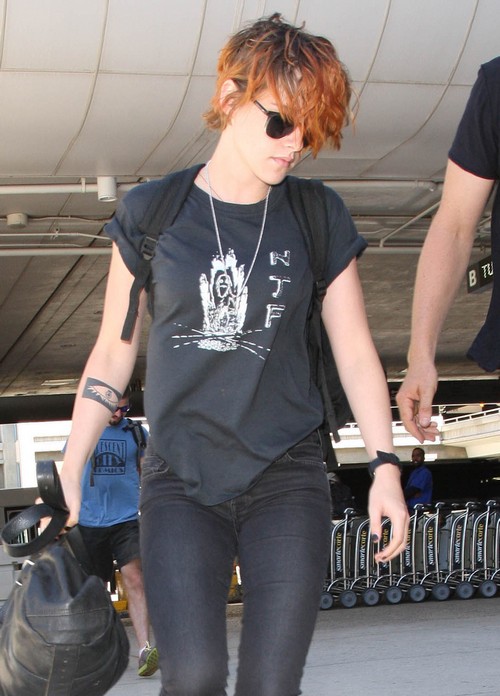 The Kristen Stewart lesbian rumors have not died down, despite every single source close to Kristen contradicting them. Guys, let’s just say it all together now – Kristen Stewart is not a lesbian. I hate to put sexuality in black and white boxes, and maybe Kristen is bisexual, but she has never – and does not plan to – date Alicia Cargile, her supposed lesbian BFF. Just because she’s cut her hair short and likes wearing jeans and sneakers does not make her a lesbian, just like Robert Pattinson not washing himself and wearing the same outfit over and over again does not make him a hobo – by the official definition, anyway.

Of course, OK! Magazine has yet to let up on the Kristen Stewart lesbian train, and so they cite a ‘source’ claiming that Kristen has hit rock-bottom. Why, you ask? Not because of her flailing career or her lack of romantic life, but because she and Alicia have apparently broken up. This ‘source’ explains, “She was devastated when [Robert Pattinson] dumped her, and now that her relationship with Alicia [Cargile] has gone south, she’s a wreck. She cries all the time. She worries she’ll never love again.”

Oh jeez. I think she’s a tad bit too busy working to sit there and cry over her failed romances. Also, the reason that she hasn’t been with anyone since Rob is because she’s still hoping that he takes her back, not because she and Alicia were having some secret fling. Besides, the girl is too busy right now to worry about romances and boyfriends/girlfriends. She’s trying her best to rejuvenate her career, and it’s already been difficult to do that on the heels of her Rupert Sanders affair and damaged reputation. She probably doesn’t need tabloids making up any more out-of-left-field rumors about her.