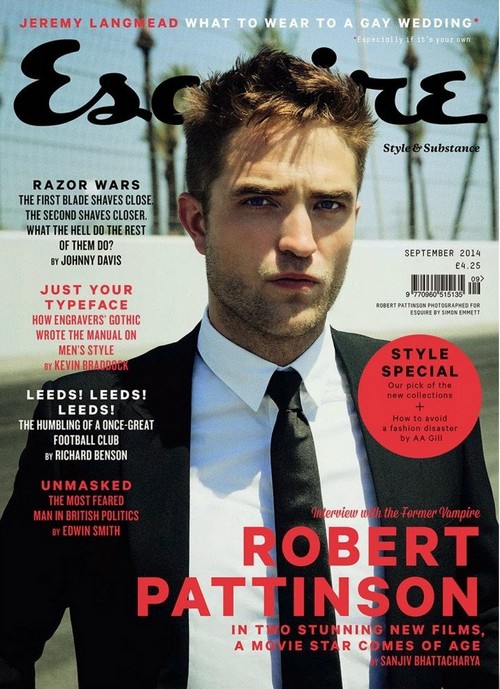 Um, is Robert Pattinson actually APOLOGIZING for discussing his breakup with Kristen Stewart? Dude, she cheated on you! Seriously, he’s either the most forgiving guy in the whole world, or just the biggest wuss in the whole world. Then again, Rob did get back together with Kristen AFTER her affair with Rupert Sanders, so we already know he’s incredibly forgiving. I just never predicted that two years after the affair and a year after their last breakup, Rob would be so casual about the whole situation.

In an extensive cover interview with Esquire Magazine, Rob opens up about the affair and the fallout from it, explaining, “Sh*t happens, you know? It’s just young people… it’s normal! And honestly, who gives a sh*t?”

Um, the answer to that would be a LOT of people. A lot of people ‘give a sh**’. Doesn’t he know that by now? Rob and Kristen dating has been at the forefront of the Twi-hards’ minds for the better part of two years now, and he should know that. He was part of the Twilight machine, so is he just fronting like he’s clueless now?

Plus, his comments do make it seem like he and Kristen are on good terms, no? He already admitted that he’s still in touch with her, which led to an increased round of reports claiming ‘Rob and Kristen dating again!‘ And now, he’s saying that he forgave Kristen, and that he dismissed the whole affair a long time ago. So what, does that mean he’s open to dating Kristen again? Well, he won’t admit that. But from everything he’s saying, I wouldn’t be surprised if Robert Pattinson and Kristen Stewart did start dating again – officially, I mean, not in a secret, friends with benefits situation.