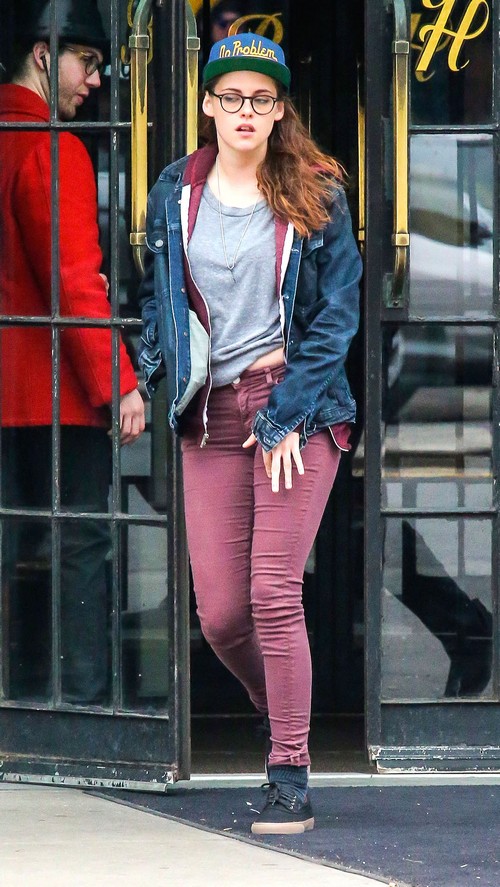 According to a new report from Hollywood Life, Kristen Stewart has gained fifteen pounds. And how do they know this? Why, by discussing it with a nutritionist, of course – and basing their assumptions on a recent picture of Kristen where’s she’s bundled up in a bulky jacket. LOL!

Let’s face it – with or without those ‘fifteen pounds’, Kristen Stewart is very skinny. But according to Hollywood Life’s ‘source’, Kristen Stewart is absolutely, unequivocally NOT pregnant. Their source claims, “Kristen is absolutely not pregnant. She has put on a few extra pounds for a movie role and that’s it. She’s already so thin so a few more pounds makes a noticeable difference. Don’t get me wrong, Kristen would love to be a mom one day and have little rugrats running around, but not for a while. Her priority right now is her work.”

Uh-huh. So not only are they basing the fact that Kristen has put on weight over pictures, they’re also making the assumption that she’s not pregnant because their ‘source’ says so. Right. I’m sure this source will also elaborate on what Kristen has been doing for the past six months, and if they can also clarify whether Robert Pattinson and Kristen are still talking to each other.

We can’t definitively say that Kristen is pregnant or not – but putting on weight is very easy to do. I don’t know where their report got the very specific figure of ‘fifteen pounds’ from, but honestly, Kristen looks exactly the same. In fact, she used to look gaunt in the face before, and she looks happier and healthier now, probably because she’s finally getting back on her feet, both career and life-wise.

What do you guys think? Does Kristen look like she’s gained a few pounds, and do you think that should be attributed to pregnancy? Let us know your thoughts in the comments.

Kristen Stewart seen leaving her hotel and rushing to a waiting SUV in New York City, New York on March 19, 2014