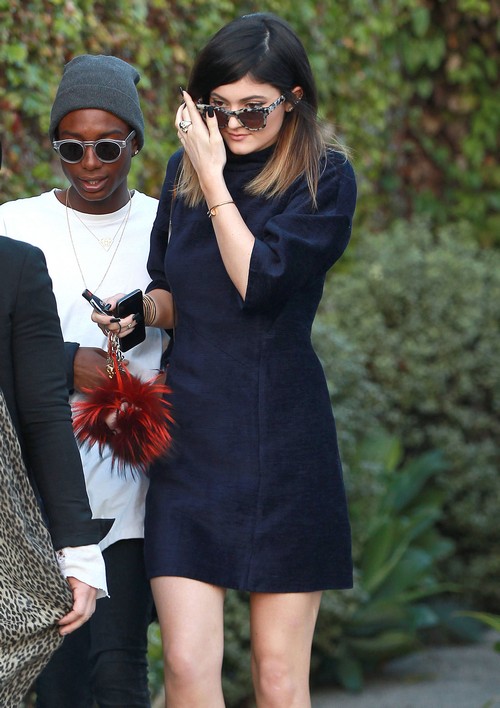 Supposedly Kylie Jenner spent time last weekend hanging out with rumored boyfriend of about a year, Jaden Smith. My guess is that things didn’t go so well between them because on Monday Kylie was spotted out on what looked like a date with a mystery guy in L.A. It was very clear that Kylie wanted this date to be captured by the paparazzi otherwise she would have insisted that they stay on the DL. It was pretty clear that it wasn’t just a friend thing either because Kylie was carrying a balloon with a heart that said “I adore you” and there is no way that she would give that sort of mixed message to the press.

Kylie recently said in an interview that she was hoping to find herself with a romantic guy eventually – is this him? The last guy other than Jaden that Kylie was linked to was Lil Za, Justin Bieber’s trouble making pal. Do you think this very public date yesterday was the real deal, a start of something between Kylie and this new dude? Or is she up to typical teen girl tricks and perhaps on the heels of a fight with Jaden decided to remind him that he’s not the only guy in the picture? Kylie may have tons of cash and come from a famous family, but she still is a 16 year old girl, not to mention the fact that she has already learned how to manipulate men from the best – her Kardashian step-sisters!

Also check out the pics of Kylie and her date. She is all glammed up looking like she is ready for a serious date and her guy, well he looks like another of Bieber’s sidekicks’ that decided to shower and throw on clean clothes. What do you think the real deal is here? Is it a real date for Kylie or just an opportunity to make her on/off boyfriend regret whatever their last fight was about? Tell us your thoughts in the comments below!