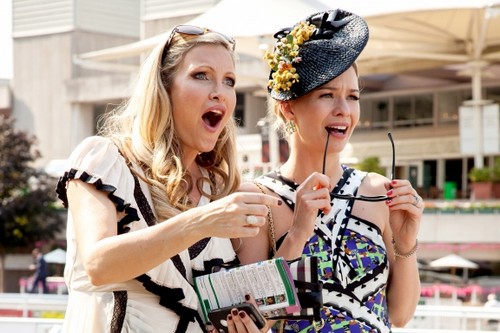 Ladies of London is an American reality television series that will chronicle the lives of six women who reside in London, England, as they balance their social lives, businesses, and families.

On tonight’s episode in the series premiere, Ladies of London explores the world of Britain’s high society. True to form, the Brits and Americans may speak the same language but have different ways of interpreting their place in this tightly knit society. This is an all-female cast that will show off fabulous outfits and gowns, fancy jewels, fashion shows, parties and names dragged through the press.

Tonight is going to be another great show from Bravo, Ladies of London and you’re not going to want to miss a minute. Tune in at 10PM EST on Bravo and we’ll be recapping it live right here for you but in the meantime, hit up the comments and let us know your thoughts of this new show.

How does an American break into the London social set?

In the debut episode of “Ladies of London”, we’re introduced to Caroline. She’s an old school Brit with a lot of high society ties. The teas, the scones, and the crumpets all included. So some would say that has made her a tad bit off-putting. And that would be the British version of an understatement. By American terms she would be considered a pompous witch. Caroline likes to believe she’s one of the society maven of London and having her face frequently grace the newspapers hasn’t done much to help. Her saving grace or better yet the only way you could tell that Caroline can be relaxed is her choice in friends. While she can come off as harsh; her friends like Caprice are a little bit more down to earth.

Caprice is an American. She came over 17 years ago to be a model and ended up falling in love with the country. So she stayed and managed to climb her way up the social ladder in an otherwise rigid system. Since then she met her boyfriend albeit late in life and they’re now having a baby. However Caprice’s story isn’t that unusual. Models can make it in the UK.

Noelle was a model though she originally came over because her fiancée was there and she wanted to see him. That relationship didn’t work out in the end. Though she did decide to stay in the city. From there she went on to meet Scott and they were quickly engaged after a very short courtship. But their marriage seems to be taking forever to get underway. And that might have something to do with Scott’s never-ending divorce from his ex-wife.

The ex-wife had accused him in open court of hiding money from her. So there was a big investigation and when Scott refused to list the business dealings of his former partners (according to Noelle) or his own transfers to offshore accounts (according to everyone else) he was then sent to jail. He’s out now and he’s back with Noelle. Much to dismay of her friends who feel like she’s taking on too much. They’re genuinely concerned about what would happen to Noelle as she strives to build a life for herself in London. The Brits tend to have long memories on these sorts of things and their friend might never be allowed a second chance on the social scene.

Annabelle, another Brit, has also had some mild flirtation with scandalous behavior though she’s a different story all together. She comes from an old aristocratic background so her acceptance was always a guaranteed even though she’s been on the party scene for quite some time.

Annabelle is a model just like the other two. Although in her case she used to be the muse and best friend of the late designer, Alexander McQueen. So not only does that set her apart from the other ladies, but she’s also still in mourning. It’s taken her a while to get back out onto the social scene and she had to be convinced to do it. Not like the Americans who come over eager to join in.

And that eagerness is what destroys half of their chances. Take Marissa. She’s American and yet she’s accepted primarily because of who her husband is. He’s a well-known club owner and it doesn’t hurt that he’s also a Brit.

Marissa is always happy and eager to try new things which is something the Brits just don’t do. And seeing as she had her path eased in – she figured after meeting Juliet who happens to be another transfer – that maybe she could do that for someone else. Yet one little problem with that. Marissa is barely accepted by people like Caroline or Annabelle.

They find her to be too American. Or in other words like an overexcited puppy that has a desperate need to please. Juliet on the other hand is worse. She’s loud and likes to be the center of attention. Not even Noelle, her own countrymen, likes her all that much. She finds Juliet to be pushy.

When all the ladies met up to watch Polo, they were the seasoned Londoners in one corner and the blatant Americans in the other. They’re completely different and to be honest these two groups would never have met if Caprice hadn’t intervened. Caprice wants to give the other Americans a fair chance. She had twenty years to break in and simply wants to help.

The ladies arrived to a simply game of polo overdressed and they actually took an interest in the game. British ladies don’t do that as well. They use these events to be seen, to drink, and to catch up on the latest gossip. So for their first outing together – the Americans still need work!