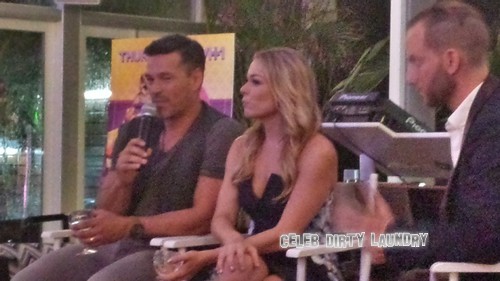 CDL was invited to a special screening of LeAnn & Eddie in NYC on July 15 followed by a meet and greet with the stars of the VH1 reality show, LeAnn Rimes and Eddie Cibrian. The event was hosted by Noah Levy of VH1’s ‘The Gossip Table’ and allowed for a robust ‘no holds barred’ Q&A session.

Everywhere you turn now – there’s a new reality show – now there is ‘LeAnn & Eddie.’ But what some of these “celebrities” ,and in case the quotations signs weren’t enough let me just say I’m using the word celebrities lightly; don’t appear to understand that while doing a show can clear up some of the rumors out there which is the number one excuse to be on TV – it also tears down that third wall. No more hiding from the paparazzi and saying your private life should remain private. Because once all of it is put on live TV then everyone’s going to have the right comment. If you didn’t want them to then you shouldn’t have aired your dirty laundry!

But secretly we’re all glad you did!

And before I start in – let’s be honest with what really happened a few years back. LeAnn Rimes and Eddie Cibrian‘s divorces from their respective spouses was not cleanly done. These people trampled over the vows and then proceeded to ride off into the sunset together. Beautiful wedding included.

Their beginnings were and still are tabloid gold. Everyone at the time, and I am adding myself to the equation, had hoped they would crash and burn. Though they’ve surprised us by so far maintaining what it looks like a healthy relationship. Somehow despite our initial misgivings and horrible example courtesy of Tori Spelling and Dean what’s his face – LeAnn and Eddie are going strong. And in doing so they’ve won back so much earned respect.

LeAnn was a child star that did good (no drugs or DUI arrests) and Eddie continues to be a TV and film heartthrob (it’s those dimples). So, yes, they’re work should get some acknowledgement however that’s not what their new show is about. From what little I’ve seen, they didn’t do the show to fight ugly rumors, they did it to capitalize on them. They filmed the first episode with Brandi in mind.

Her name came up way too often in the premiere episode (even for my liking). And though they claim everything is Kumbaya with their co-parent – that didn’t stop them from making their little digs now did it.

You know how I can tell their digs are just that – I’ve seen Brandi do it better on her own reality show. That girl doesn’t pull punches. She says what she thinks loud and in your face. Her ex on the other hand plays a more subtle game. During the Q&A, which was so tame it would have made Wendy Williams scream in frustration, all Eddie and LeAnn could say about their decisions on being a home-wrecker was that they were unhappy back then.So unhappy as a matter of fact that they didn’t want to risk having regrets.

They then went on to dig the knife a little deeper by saying they didn’t know what love was really like until each other. And, hey, what a nice a way to crap on a marriage that at least meant something to someone else if not you.

All this talk about what to getting away from the ugly rumors and yet they manage reignite every nasty thing I’ve ever thought about them. Some of which has been dormant for years. They are tactless. It’s been years since the incident and they still haven’t found a way to not hurt other people.  Like his children who came from the regrettable years.

No one was expecting “I’m sorry” from them. After all they shouldn’t have to apologize for what they do behind closed doors but the last part is where the problem is. Those doors aren’t close anymore and this couple took their showboating too far with both the show and the press tour.

When they were discussing his children’s reaction to their dad’s divorce from their mom and LeAnn used her own experience of how relieved she was when her parents announced their divorce to her – all I thought about was what Brandi was going to say next.

I, as a third party could see how her words could be misconstrued. I am an adult while Brandi however remains in the in-between stage. So when she said it – I winced at the faux pas. But when Brandi hears it and reacts. I’ll be sitting back enjoying the show.

If these people wanted their privacy then they should have had their work and not the scandal sheets do the talking for them. This show is only going to make their lives worse so I hope the quick buck they’re earning from this was worth it!