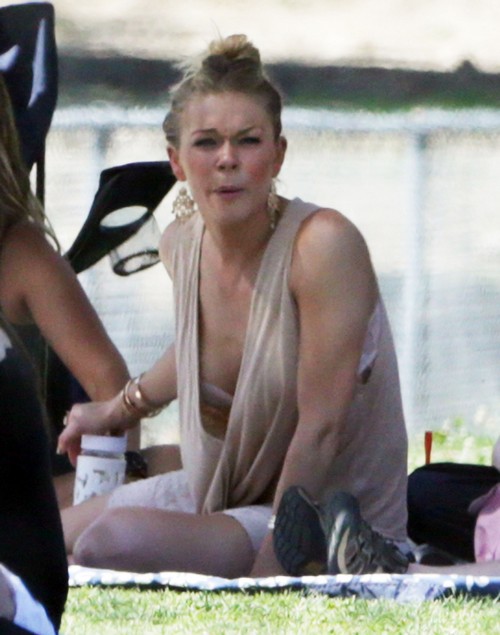 LeAnn Rimes was spotted with hubby Eddie Cibrian at their son’s baseball game in Calabasas this past Sunday. There were [obviously] paparazzi at the game that LeAnn probably called, and thus, pictures of Eddie and LeAnn at the game.

Isn’t it funny how the paparazzi manage to get practically daily pictures of LeAnn, despite the fact that neither her stepsons nor her husband ever get photographed without her? Or the fact that the paparazzi manage to find her even if she goes to different places? Do I really have to spell it out for anybody? There’s a clear decision making process behind all these pap photos, and it’s obvious that it’s LeAnn’s desperate cling to relevancy – especially now that her arch-nemesis Brandi Glanville‘s landed two reality shows whereas LeAnn doesn’t even have one on the air yet.

Anyway, I have so many thoughts about these pictures, I don’t even know where to begin. First of all, what is LeAnn even wearing?! Is that what you wear to your son’s baseball game? Eddie’s dressed pretty appropriately, but LeAnn’s wearing a flimsy dress that barely covers all her bits and pieces – how is she not supposed to have a wardrobe malfunction in this dress? But wait, I forgot. If she does, the paparazzi will conveniently be there to candidly capture the moment.

It’s also possible that LeAnn and Eddie decided to call the paparazzi to the game in a bid to fight the allegations that they’re bad parents. It’s like they’re saying, ‘see, we’re at her kids’ baseball game!’ But seriously, when will these famewhores stop famewhoring? Or at least learn to refine their fame game a little?

What do you guys think of these pictures? Let us know your thoughts in the comments below.