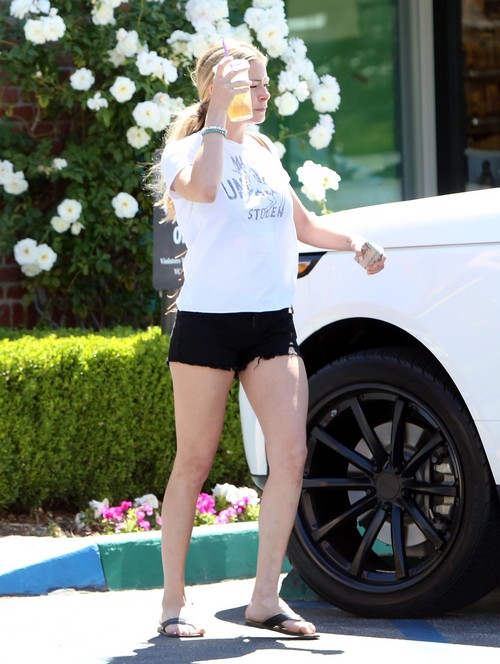 LeAnn Rimes is an expert on calling the paparazzi, but she’s not very good at pretending that she doesn’t love them. There are new photos of LeAnn out at Coffee Bean in Calabasas yesterday, and she’s pretending to cover up her face and look away. Secretly, you know she’s trying to figure out all her best angles and pose so that the paps get the most flattering shots of her face – without looking like she’s a desperate famewhore, of course.

However, that’s much easier said than done. I think everybody who has even the most passing interest in reality stars knows that LeAnn calls the paparazzi every single time she goes out, and half the time, they’re not even bothered to show up. But of course, when they do show up, we get ridiculous and pretentious pictures like this. As IF LeAnn would actually cover her faces for the paparazzi. She’ll pretend to, sure, but in the end, she’s always make sure they get the shot. Always.

Anyway, LeAnn’s antics have died down a little over the past few months, perhaps because she’s saving it all for the TV show. However, she has upped her social media posting, and it seems like every other Tweet she sends out is about her hubby, Eddie Cibrian. She recently posted about their three year anniversary, which was last week. She wrote, “So blessed to be married for 3 years today to my heart & soul @EddieCibrian. I’m so proud of the life we’ve created together.”

As Celebitchy noted, it is relatively low-key for LeAnn to just tweet about her anniversary, as opposed to Instagramming pictures non-stop. Is it relationship issues that she’s trying to hide, or has she finally learned the meaning of subtlety?

Of course crazy LeAnn did tweet about her hangnail surgery:

“Seriously painful hang nail. About to have surgery at the derm. This is not going be very enjoyable!!”

“Omg, that hurt!” Numbing shots on your fingers are no bueno! at least I don’t feel any pain right now or my hand for that matter.”