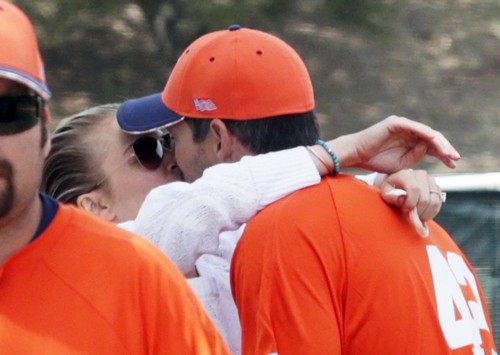 LeAnn Rimes dislocated her jaw during a concert Saturday night but that didn’t stop the creature. She still managed to call the paps and show up for Brandi Glanville’s sons’ baseball game for some inappropriate PDA with Eddie Cibrian. In fact her jaw does look unaligned in some of the pics below. LeAnn failed to properly complete her concert and then took to Twitter to explain: 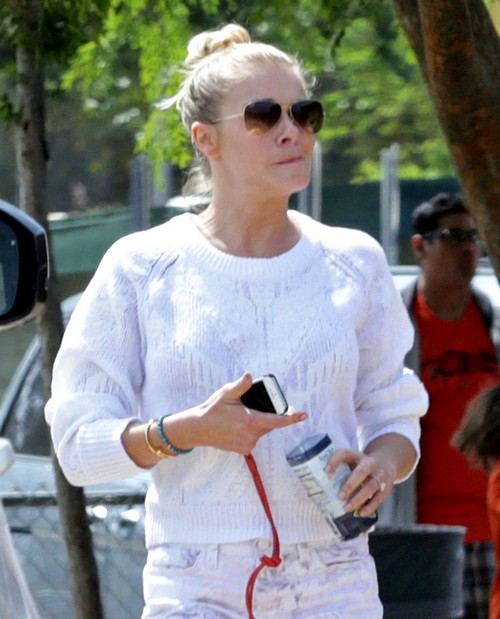 LeAnn Rimes has always erred on the side of inappropriate, that’s nothing new. There is hardly anything to be said about her that hasn’t already been said. It is hard however for normal people with strong moral fiber and boundaries to comprehend her actions. That all started when she decided to have an affair with a married man Eddie Cibrian; having been hypnotized by his borrowed shlong, she then locked down on him like a pitt bull and has been dragging him around by the throat every since.

If having an affair and destroying two marriages wasn’t a big enough swan dive into an ocean of rotten, LeAnn seems to take pleasure and pride in baiting the Cuban captive’s ex wife. Seeing as though Brandi Glanville has the emotional maturity of a child she reacts, loses her ever-loving mind on social media, and makes herself look crazy much to the delight of the grinch who stole Eddie Cibrian. Regrettably, LeAnn’s favorite weapon of mass destruction seems to be the children the dimpled captive had with his ex wife. I know what you’re all thinking, children should never be used as weapons, but this is LeAnn Rimes were talking about here…. Which beings me to the latest children’s sporting event to be high jacked by this maniacal twit.

LeAnn showed up to a children’s baseball game in Calabasas wearing skimpy shorts while foundling her captive every chance she got; Classic LeAnn. This is just an observation but Calabasas seems like a celebrity landfill, full of rich garbage. It seems that all the most horrid celebs live there… but I’m getting off topic.

Am I the only one who thinks it strange that LeAnne attends just about All of the children’s events up to and including parent teacher conferences? She’s a step mother and that is an important role, But LeAnn seems to want more and it’s coming from a selfish and vindictive place rather than one of concern for her step children.

Her presence is a passive aggressive way to impress upon everyone including Brandi, and the paps she calls that she is as much a parent as Brandi, which she isn’t. Do the boys like her? I believe they do. Is she nice to them? She probably is, but she didn’t gestate and push those children out into the world and she has no freakin’ place at their parent teacher conferences, she probably can’t even comprehend math homework; what possible reason could she have for being there?

Unless the bio mom is completely absent from the lives of the kids, then I feel she should keep a respectful distance and be a support to her husband as he raises his children with his ex-wife. If she just cooled it with the kids, maybe I’d throw up in my mouth a little less when I see her.

Furthermore, this chick is incapable of dressing appropriately for a children’s event. Wearing Dailey Dukes and grabbing you hubby’s arse (for the benefit of his Ex wife) is not only trashy but transparent as well. Even if she and the Cuban captive are blissfully and madly In love these desperate attempts to show everyone is counterproductive and it reeks of inauthenticity. And what in the heavenly host is she wearing? it’s hard to determine what the weather is like based on her attire.

If it’s cold enough to wear a sweater, then why is it also hot enough for Daisy Dukes and sandals? And don’t get me started on her hair. LeAnne has the worst messy buns I’ve ever seen. A messy bun is supposed to be chic yet effortless. What LeAnn has is a greasy hillbilly abomination on the top of her head, she might as well just wear it down because anything is an improvement on that. What do you guys think? Is his later display trashy or is LeAnn really really in love? Let us know in the comments section.