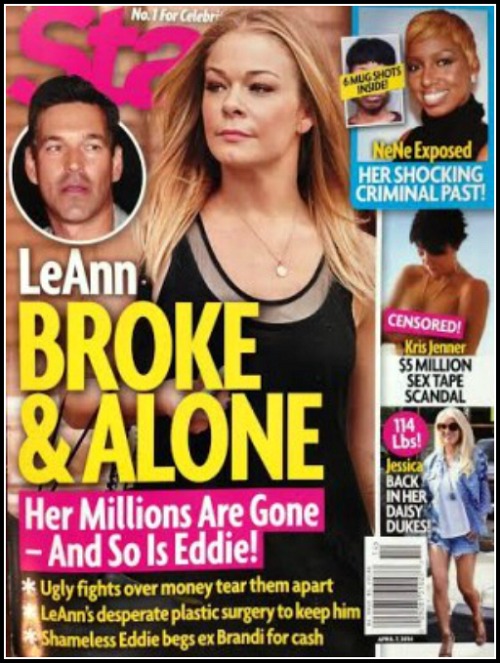 According to the latest cover story from Star Magazine, LeAnn Rimes is ‘broke and alone‘. And yet, she still has enough money to flaunt her latest designer duds at every soccer game with Eddie Cibrian‘s kids.

Star’s cover story claims that LeAnn is struggling to pay her bills amid fears that Eddie will dump her, and she’s worried that he will leave her if she stops bringing in the cash that she once used to. Star also claims that Eddie is so desperate for more money that he’s turned to his ex, Brandi Glanville, for cash.

I’m sorry, I don’t buy this story at all. LeAnn and Eddie love flaunting their wealth, and they have a $3 million house and often take very expensive vacations. However, I can say that neither of their careers have taken a significant upswing recently, which means that if they don’t get their reality show going and/or find something else to bring in their income, they will end up strapped for cash, sooner or later. They live a very lavish lifestyle [much more so than Brandi Glanville], and that’s only going to be sustainable if they have more income coming in.

Now, if that doesn’t happen – and their reality show tanks in the future – then I can see Eddie dumping LeAnn. LeAnn’s already lost a ton of weight and gotten plastic surgery to keep Eddie, so I don’t think she’d ever let it get that far. If they were in danger of becoming broke, she’d turn to very drastic measures to ensure that doesn’t happen.

There’s also a story on Kris Jenner’s alleged $5 million sex tape scandal, which honestly, don’t be surprised if it was leaked by Kris herself. Maybe the Kardashian family matriarch was jealous that she was getting overshadowed by all her daughters?

Finally, Star claims that Jessica Simpson lost 114 pounds and is ‘back in her Daisy Dukes‘, but I think 114 is stretching it a bit. She definitely lost a ton of weight as part of her Weight Watchers deal, but 114 in such a short amount of time is bordering on unhealthy.