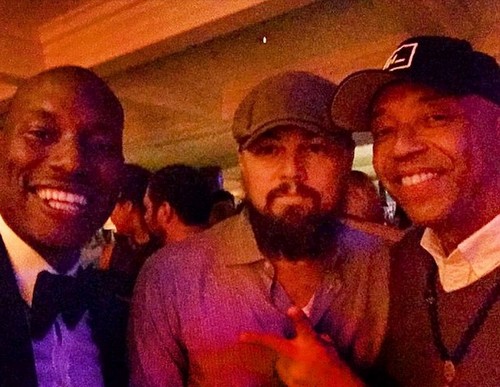 Leonardo DiCaprio continues to prove that he has the emotional maturity of a 22-year-old frat boy, especially now that the glitz and glamour of his career has been stripped away. Leonardo DiCaprio enjoyed 3 days of wild partying to ring in his 40th birthday as his career is on a precipitous decline, pathetic or what? Leo hasn’t made a proper movie in a while, and although his resume is littered with Oscar winners and critical favorites, his image just doesn’t do his past career choices justice.

More specifically, nobody really puts Leonardo DiCaprio in the same sentence as Brad Pitt and George Clooney anymore. For one thing, Brad and George are married, and Leo is continuing to party with 20-year-old supermodels. You know that old adage ‘I get older, but they stay the same age’? Well, Leo’s literally living that. His girlfriends continue to range from 18-25, and he gets older, creepier, and more bloated. Right now, he’s not attached to any major film role, and if he continues like this for a good amount of time, I can imagine that he’ll get even more bloated and even more hideous.

I mean, have you guys SEEN the images of Leo from his 40th birthday party? It was held at the Soho House in Los Angeles, and 80% of the guests were reportedly models – and the other 20% were former members of Leo’s pussy posse, plus some new members [Robin Thicke, ugh]. There were not many industry bigwigs, it wasn’t a particularly classy affair, and the whole shebang has really started to encapsulate Leo in a way that his career never did: a perennial frat boy. He can make as many good movies as he wants, but he isn’t on the Clooney or Pitt level anymore. He doesn’t command the same type of respect, and his personal life will slowly start to erode whatever professional cache he has left in the industry – mark my words.