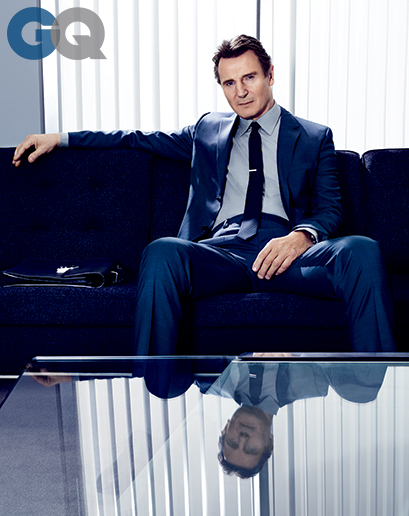 Liam Neeson is one of the best actors out there. He’s acted in a wide range of films with a wide variety of directors, so it isn’t surprising that he’s worked with Woody Allen as well. Neeson recounts that he was filming a love scene on the set of Husbands and Wives when the Spoon-Yi scandal broke. According to Neeson’s GQ interview:

“There was one incident — people think I’ve made this up, but no. There’s a scene where I’m going down on Judy Davis, right. Judy and I are in bed — obviously covered up — and as I’m going down, Judy’s having this monologue in her head,” Neeson, 61, explains. “And the crew are all ready, and we’re waiting for Woody. No-show.” If that isn’t awkward enough,it gets worse:

“It’s starting to get a bit uncomfortable — it’s a bed scene,” the actor continues. “Anyway, he came out after about 20 minutes and said, ‘Okay. Camera starts on Judy. Liam, I want to just see the top of your head. Okay, we know where you’re going…’ So there was no apology; nothing.”

Liam later found out that the twenty minute delay was because Allen was on the phone with his attorney strategizing as the scandal of his affair with his girlfriend’s barely legal adopted daughter broke – Mia Farrow had just found naked pictures of the child in Woody’s possession. The juxtaposition of this is simply cosmic, as Woody’s character was sleeping with a much younger woman in the film. Additionally, The Soon-Yi thing alone did him no favors. Situations like this are not that uncommon, especially in Hollywood, and still very tricky.

When Dylan Farrow wrote her open letter accusing Allen of sexual abuse she was no holds barred. She called out the actors who’ve worked with him in the past despite her claims. Most of them, including my girl ScarJo were all like “meh, he’s a great director and you can’t prove it so let the good times roll.”

Even though Allen was never convicted, one must admit that a very creepy ice cream truck driver vibe wafts from him but most actors don’t care, anyone who can satisfy their boundless ego is a friend, much to the chagrin of the Farrow family who publicly slam Allen every chance they get.

Liam however, seems like a straight shooter and one of the few Hollywood hunks who isn’t full of crap, or himself for that matter. I wonder if he’s been in any movies directed by Allen since then or if he’d even consider it? Neeson strikes me as a real salt of the earth type of guy who loves his kids… and also a very particular set of skills, if you know what I mean; so he might not be as forgiving as other actors.

The sad thing here is that even if Woody Allen got caught in the act, actors would still work with him. Roman Polanski is a prime example of that. He was convicted of inflicting atrocities on a minor, fled the country to escape punishment, and yet actors still appear in his movies proudly. Predators thrive in Hollywood, and I suspect it will always be that way.

But back to Neeson because he’s so cool. Liam touched on his life after the tragic death of his wife Natasha Richardson. He says that although he’s doing well, he misses his late wife and wishes she was there to help with the children and their transition into adulthood: “It’s still a day-to-day thing, you know?” he says, noting that he worries constantly about his kids getting into drugs. “My boys are teenagers. They’re experimenting…You think, ‘F–k. If Tasha was here, someone could share this.’ But yeah, we’re doing all right, you know?“

Liam admits that he’s not dating at the moment and comically shared that he didn’t know what the male version of a cougar was. Uh, Liam the male version of a cougar would probably be “The Hefner” or “The Clooney.” It’s refreshing that’s he’s not out chasing tail like its a finite natural resource, way to set a good example for his boys. That only makes me respect him as an actor and a person and I hardly ever do that. What do you guys think? should Liam embrace his inner Hefner? And if so who with? Sound off in the comments section!