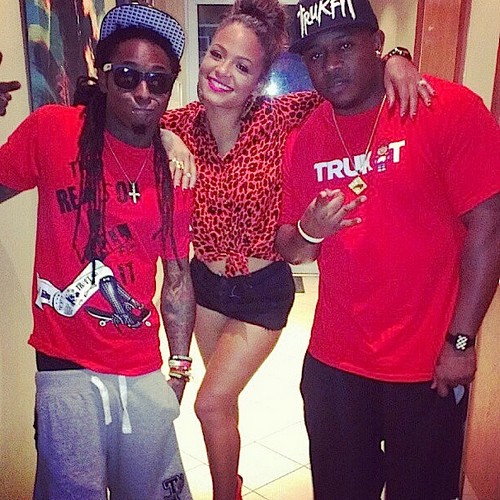 It looks like “Tina Turn-Up” is still getting her engine tuned up by none other than Lil Tunechi himself. Lil Wayne caused a mini uproar earlier this week by showing up to the 2014 ESPY Awards with his new YMCMB artist Christina Milan on his arm. These two have been spotted out looking might chummy over the past month, causing many folks to question if their relationship extends beyond the professional realm into something a little more…personal.

Not that a new love connection is necessarily a bad thing. It is just that in this case, it is a somewhat awkward thing. You see, Lil Wayne and Christina have a lot of connections between them that do not lend themselves towards a harmonious union. For starters, their children share stepsiblings! Christina has a daughter by her ex-husband Terius Nash, better known by his stage name The Dream. In case you didn’t know, The Dream is a star producer, singer and songwriter who has worked with big names such as Beyoncé, Britney Spears, Justin Bieber and Rihanna. The Dream was married to a singer named Nivea before Christina Milan, with whom he has three children. After Nivea and The Dream divorced, Nivea went on to have a son with Lil Wayne. A bit confusing, but you get the picture.

So aside from their children sharing stepsiblings, it is also a little weird that this is the second ex-wife of The Dream that Lil Wayne has been romantically linked to. It makes you wonder, does Lil Wayne like smashing chicks after The Dream has had a go at them first? (Sorry, it is a crass thing to think and let alone write…but I couldn’t help myself) Of course, this sort of sexual six degrees of separation is nothing new in Hollywood. You may be thinking so what, big deal. Well there is more depth to this story. Still waters indeed run deep in this case.

Christina Milan just called off her engagement to Jas Prince back in June. Jas Prince is the son of famed CEO of Houston based Rap-A-Lot records James Prince, and is considered as somewhat of hip hop royalty. Jas Prince is also credited with introducing YMCMB artist Drake to Lil Wayne a long time ago. Interestingly enough, Lil Wayne and Jas Prince were really cool with each other until as of late. Word on the legal curb is that Jas Prince has filed a lawsuit against YMCMB management to collect on unpaid royalties he is due on some of Drake’s musical ventures. A lot of whispers being heard suggest that Lil Wayne started digging on Christina Milan before her and Jas Prince broke up because he was salty about the lawsuit.

In fact, Lil Wayne released a song right before Christina and Jas broke up and immediately following the filing of the lawsuit called “Tina Turn Up Needs A Tune Up.” Man oh man, are the lyrics telling:

Blind eyes can see that these lyrics are directed at Jas Prince. Apparently Lil Wayne feels like Jas Prince does not deserve everything he has just because he is the son of James Prince. Streets have been talking and saying that Lil Wayne felt some type of way paying royalties to Jas Prince for Drake. Clearly “Tina” probably stands for ChrisTINA and Lil Wayne is the king she needs, not a “Jas” Prince.

Now TMZ has reported that allegedly all of this is a media ploy on Lil Wayne’s part to sell more records. Christina has been in the studio working on her album and apparently Lil Wayne is simply drumming up publicity for the release. Personally, I HIGHLY doubt this is a simple publicity stunt. Lil Wayne is about that life. I mean c’mon, he does have four kids by four different women. I need your help washing this load out. What are your thoughts on all of this? Share them with us in the comments section below!