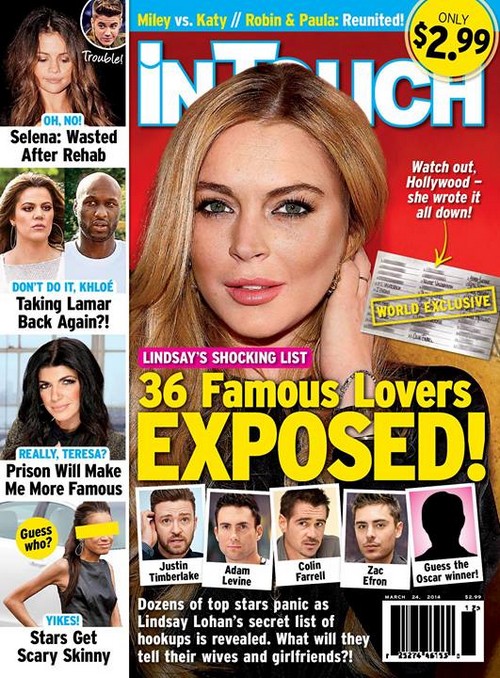 Oh, Lindsay Lohan. This is just sad and desperate now, watching her cling to her past and refusing to let go. According to the latest cover issue of In Touch Weekly, Lindsay had written a list chronicling her list of ex-lovers in Hollywood, and the magazine reportedly got their hands on it.

A source tells In Touch that Lindsay was making the list with some friends at the Beverly Hills hotel in January. The source elaborates, “They were giggling and talking s— about people in the industry. It was her personal conquest list. She was trying to impress her friends with the list and then tossed it aside.”

Apparently, the list includes the likes of Adam Levine, Joaquin Phoenix, Justin Timberlake, Zac Efron, Evan Peters, Wilder Valderrama, and Colin Farrell. The source also adds, “The list has some pretty big names on it, and they’re not all single guys. This getting out now could rock several Hollywood relationships to the core.”

This is how much Lindsay’s stock has dropped in Hollywood – people are this terrified of being linked to her, even if it was five or ten years ago. Honestly though, Lindsay was a major star after Mean Girls came out, so I could see her having hooked up with Adam Levine, Wilder Valderrama, and Colin Farrell, all celebrities notorious for sleeping around. But then, we have Joaquin Phoenix, who I feel like would rather eat dung than spend time with Lindsay Lohan. Justin Timberlake – maybe? Zac Efron still hadn’t had his Disney breakout when she was at the peak of her popularity, but knowing his propensity towards drugs, I can imagine they had a bender or two together.

But even still, there’s a much bigger chance of Lindsay making all this up to brag to her friends than any of it actually being true.

Anyway, in other news, Teresa Giudice is apparently convinced that prison will make her more famous, which – delusional much? There’s also a story on how Selena Gomez recently became wasted, despite her rehab stint. I think we all know something’s going on with that girl, and hopefully it doesn’t get worse before it gets better. And finally, is Khloe Kardashian taking Lamar Odom back?