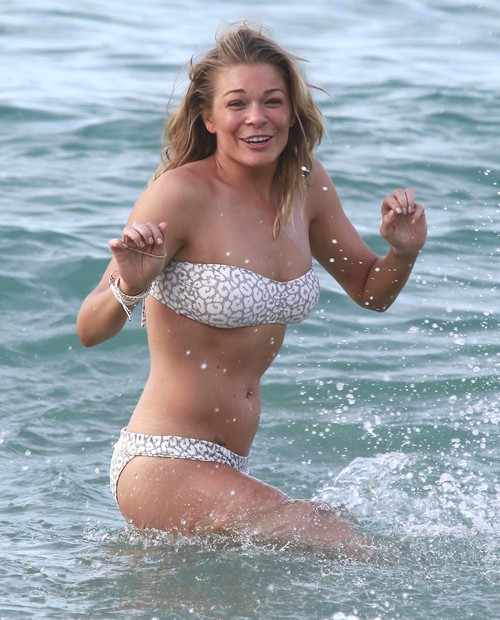 LeAnn Rimes, calling the paparazzi? You don’t say! In a completely unsurprising move, LeAnn called her good friends the paparazzi to come take pictures of her in a bikini, frolicking in the waves in Hawaii. It’s kind of hard to argue that she didn’t know the cameras were there when she’s staring right at them, and often posing for them.

LeAnn and Eddie Cibrian are both in Hawaii right now, probably creating more fake drama for their reality show. Unfortunately for them, nobody really cares, and that’s probably why LeAnn decided to create some buzz.

There were a lot of rumors surrounding LeAnn’s extreme weight loss over the past few months, and she had to weather quite a few accusations claiming that she had gone on crash diets to try and prevent Eddie from straying. Whether those tabloids were lying or LeAnn just gained the weight back, she definitely looks healthier than she did before. That’s probably another reason she called the paparazzi – to prove to them that she’s not anorexic. I would buy the story, if I didn’t believe that those initial tip-offs came from her in the first place.

Anyway, a reality star calling the paparazzi on herself is nothing new, and actually, it should be expected procedure for them. It’s practically protocol at this point, and to expect anything else from these D-listers is asinine. Besides, LeAnn’s got a plan – she’s going to get that reality show cash, and then she’s going to hold that over Eddie’s head so that he’ll never, ever leave her.