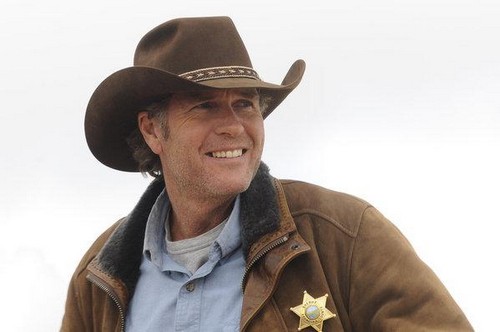 The recent cancellation of A&E’s western drama Longmire has left Fans in an uproar since August when the network axed the popular show. Longmire was cancelled because it wasn’t appealing to their younger demographic, 18-49 year olds, and the audience was comprised of a slightly older average demographic. Ironically, it was bringing in over four million viewers and was easily A&E’s most successful scripted series, the only problem was the viewers were older than advertisers liked to see, thus the cancellation.

GLOBE Magazine has joined forces with diehard fan group Longmire Posse to encourage Longmire fans to boycott A&E, and petition to have another network like USA or Netflix pick up the western series. In the October 27th edition of GLOBE Magazine columnist Debbie Reynolds, who is known for her superb advice, weighed in on the issue and offered Longmire fans her two cents. So, what does Debbie have to say to Longmire fans? “Vote with your remotes!” Reynolds reminded fans that there is power in numbers, and ratings are everything. If Longmire fans want A&E to acknowledge them, the best way to make themselves heard is to stop tuning in to the network all together and hurt them where it counts, their ratings.

Longmire fans need to stay strong and solidified against A&E. And, with this much uproar being made over the drama, other networks will realize how powerful the Longmire fanbase really is, and will want to pick up the series. The Longmire Posse and GLOBE aren’t just fighting for Longmire, axing TV shows because their viewers are “too old” seems to be a trend with networks, and Longmire is just one of the many shows that fans could lose. Just because you aren’t between the ages of 18-49 doesn’t mean your viewership doesn’t matter!

So, have you joined Longmire Posse on Facebook yet? Are you one of the fans who have recently boycotted A&E for the cancellation? What actions have you taken to try and save Longmire? Let us know in the comment section below!