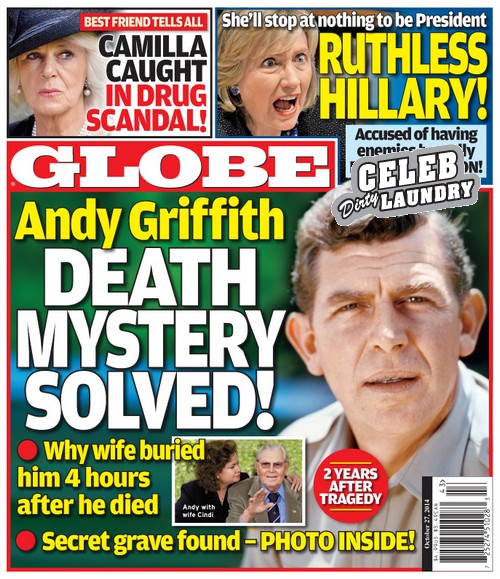 Camilla Parker-Bowles, the wife of Prince Charles and daughter-in-law of Queen Elizabeth, is easily the most hated woman in England. Then again, it is tough to like a woman who is so wretched that she harasses Kate Middleton while she is pregnant, refuses to divorce Prince Charles unless she receives a multi-million dollar payout form the Royal family, and the 67 year old wife of Charles has even gone as far as to try and trick the Queen of England into handing over her crown.

According to the October 27th cover of GLOBE Magazine, Camilla Parker-Bowles can add drug scandals to the lengthy list of reasons the people of England despise her. The cover of this week’s edition screams “Best Friend Tells All: Camilla Caught In Drug Scandal.” We’re not sure which is more shocking, the fact that Camilla was caught up in a drug scandal, or that she actually has a friend. GLOBE Magazine is written by research journalists who never shy away from writing controversial articles and exposing shocking scandals, like drugs somehow involved with the Royal family. Can you imagine how ailing Queen Elizabeth will react to Camilla’s latest affront to royal dignity? The monarch certainly has suffered enough with Camilla but this might just be too much for Elizabeth to bear. Not to mention Prince William’s ire at Camilla dragging the royal family down. Bad enough that Camilla cheated on his mom, Princess Diana with Prince Charles but facing more shame is more than the prince needs.

So, what do you think about Camilla Parker-Bowles’ drug scandal, is she doing drugs, selling drugs, an ex-drug addict or does it involve a relative? We can’t wait to pick up the October 27th edition of GLOBE Magazine as soon as it hits newsstands this week so we can get all the scandalous details. Don’t forget to check CDL later this week for a full report on Camilla Parker-Bowles latest scandal as well GLOBE’s reports on efforts to save TV favorite ‘Dallas’ and details on Hollywood icon Debbie Reynolds joining the fight to save ‘Longmire.’