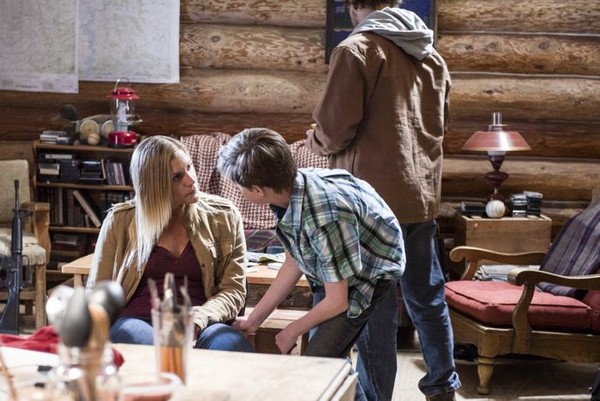 Longmire airs tonight on A&E with another episode of season 3. On tonight’s episode called “Population 25,” Walt forms an unlikely alliance after Vic and Sean are kidnapped.

Throughout most of  season 3 so far, we have seen Walt try to figure out the answer to something that has haunted him for so very long, it is a part of who he is and that is, who is responsible for killing his wife? While we don’t know the answer yet, we are hoping that season three will shed some light on this mystery.

On the last episode when a man missing for 30 years showed up dead, Walt had to deal with media frenzy and determined if he really was the long-lost heir. Henry was tired of relying on others and made a risky decision. Did you watch the last episode? If you missed it we have a full and detailed recap, right here for you.

On tonight’s episode things start to get serious when Vic and Sean end up getting kidnapped, this puts Walt in corner and he ends up having to make an unlikely allegiance in order to get them back and save them.

Tonight’s episode begins with Walt creeping through the brush, gun in hand, when he walks into something on the ground…Branch. He looks down at him and tells him in his classic voice, “This is your wake up call.” Meanwhile, Vic is surprised by Sean with a hot little car to use on a three-day weekend trip. They are driving so Sean thought it would be nice to have a fun little sports car.

At the station, Walt and his team are looking for information on Darius, who is working with Malachi. Branch and Walt are fighting over David Bridges and Walt explains to Branch that he needs to out his effort into investigating cases they are supposed to be working on. The conversation is definitely heated as the two continue to argue over the same issue that has been a source of contention for a while now. As they argue, Vic and Sean are enjoying the ride until they hit a curvy road. As Vic begins to feel sick, Sean swerves to avoid hitting a bear on the side of the road and they gave an accident.

Walt asks Henry about what Dina had to say about her encounter with Darius. Walt is interrupted by a call from Sean. Sean tells him about the accident, but then something far scarier. Sean explains that Vic went to look for help down the street. He saw a car coming from the same direction that he tried to wave down. The car almost ran him over as it sped away, but not before Sean got a look at the driver….Ed Gorsky. He tells Walt Vic has been kidnapped. Walt runs out to meet Sean and to try to locate Vic. When he arrives at the crashed car, Sean is gone as well. He radios in to Ferg and tells him to check the plate number of a vehicle he believes belongs to Ed. Just then Walt hears someone call out to him. He is told to put down his weapons and he obliges after he is told he’ll find out what happened to Vic when he does. Ed Gorsky comes out and takes Walt’s guns from him. He explains that he is not sure what has happened to Vic but he has been keeping an eye on her recently. He tells Walt that he DOES know what happened to Sean and a flashback shows Sean being beaten up and thrown into a car that drives away from the scene.

Meanwhile, Vic somehow must have let her guard down as the next scene shows her in the home of some creepy characters that are offering her food. She finally begins to feel uncomfortable after they are pushing her to eat a sandwich. She says she should head back to her husband since they do not have a phone she can use to call for help. As she goes to leave, the man says her name which sends chills down her spine as he seems to know her. She turns to the door and sees pictures of herself, and of Walt with their heads circled. It was a creepy montage of pictures that tells her she made a bad choice. Just as she is ready to bail, two men with guns kick the door open leaving her completely trapped. The creepy man walks from the kitchen to her back and tells her, “We’ve been expecting you.”

Ed is walking with Walt, holding a gun behind him as he walks. Ed asks about what he knows about “room 32” and the history between him and Vic. Walt claims not to know much and questions his stalking of her. Ed acts as if he doesn’t know who took Vic, but Walt thinks he has something to do with it. Ed tells Walt to stop walking and he tries to assure him that he really had nothing to do with Vic’s abduction. At the station, Branch is questioning Ferg about Gorsky and Vic’s connection to him after hearing she may have been abducted, he starts searching online to see what he could find.

At the home where Vic is being held captive, she is now handcuffed to a chair and the man who is keeping her seems to suspect she is after something because she was found around his home. Ed finally convinces Walt that he doesn’t know where Vic is, the two join forces to try to find both Vic and Sean. The two talk as they walk and Gorsky opens up about his feelings for Vic and questions her decision to be with Sean. The come upon the house where Vic is being held but lay low while they devise a plan.

As Vic fears for her life, Sean is dragged in and thrown down. Their captor demands to know if Sean called Walt and asks for his cell phone and the passcode so they can look through the phone. When he gets upset that Sean is not cooperating, he puts helmets on Sean and Vic. He has the little boy who is holding a bat come over and hit Sean on the head as hard as he can. Sean is knocked to the ground. Vic cries and screams but her voice is muffled because of the helmet. She makes a move to escape and scuffles with a few of the people in the home but is not the victor in the battle.

Branch is snooping on the computer and finds the letter Vic wrote to Walt where she shares her concern about Branch’s recent behavior and some of the things she’s heard he is involved in. He is clearly upset, especially after seeing her call him “unstable” in the letter. He is interrupted by a call from Ferg who shares that he doesn’t know where Walt is and tells him what he has been told about the abandoned cars. He tells Branch that a deputy is going out to check. The next scene shows Walt and Gorsky still hiding out of sight. They see the deputy approach and Walt tried to warn him to leave but Gorsky quickly pulls Walt down and will not let him attempt to save the guy as he knows he’s been seen and if they tell him to leave, they will be seen as well. Gorsky made a good call because the deputy was shot as he approached, just looking around outside. Two of the men (the same men who took Sean) grabbed the deputy and quickly drove his lifeless body away. Gorsky restrains Walt again so they don’t get noticed and can somehow get in to save Sean and Vic. Sean and Vic are now thrown in a basement, where they await their fate from the horrible family who has taken them. They are both alive but in bad shape. Vic cannot stop throwing up, but Sean tries to calm her. Sean tells Vic that he will give the passcode for the phone to then men so they will be released. Vic schools him and shares that they need to keep them in the dark about the passcode because that is the only thing that is keeping them alive. They won’t be killed if they have information the men need.

Vic assures Sean that if he did call Walt, he will come. Just then, a body bag is thrown down next to them. Vic screams, thinking it is Walt. Thankfully it is not, but when Walt is able to sneak in to a hidden area near the home, he finds another dead body, frozen.

Branch arrives at the scene of the accident and calls out for Walt. He begins looking for clues. Meanwhile, Walt ambushes one of the men from the house and asks about Vic. At gunpoint he shares some information about their captor, Chance. He has made a makeshift courtroom where he is the judge because he believes in due process, the boy says. As Vic and Sean are seated next to each other, Sean gives up the passcode. He is then taken away as Vic cries for him and he struggles because they are keeping Vic. They throw a helmet on Sean’s head again and take him away. Vic questions where Sean is and is told by the creepy “judge” that he was not afforded any rights when he was on trial. He is upset because Walt visited him a few weeks prior questioning him about his wife’s death. Vic is not giving in and the “trial’ is interrupted when the boy who was ambushed comes in and tells them Longmire is there and wants to “settle out of court.” Vic is brought out with a gun to her head and Walt sets the challenge that everyone be let go and and it should just be between the two of them. Ed walks up next to Walt and Walt pushes the criminal to settle this between the two of them. He tells them to let Sean and Vic go. There are about eight people with guns held toward Ed and Walt. They let Vic go and Ed drives her off as everyone runs away from the house so that just Walt and his nemesis are there. The two men talk about prior killings and what Walt has been looking for-namely the man who murdered his wife. They both have a gun held to one another as they calmly talk. The man refuses to give up after claiming he did not kill Walk wife.

Wow. This episode may have been the most exciting of the season so far. Tell us what you thought about this nailbiter!!