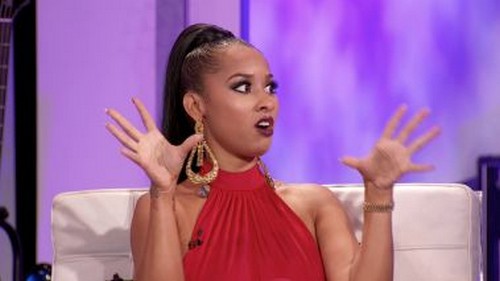 Tonight on VH1 LOVE & HIP HOP ATLANTA airs with a brand new episode called, “Reunion Part 2.” On tonight’s show Joseline continues to fight with other cast members on and off screen.

On last week’s episode part 1 of 3, the cast members reunited to revisit the dramas of Season 3, leading to explosive showdowns involving Stevie J, Joseline, Benzino and Althea. Sommore hosted. Did you watch the last episode? If you missed it we have a full and detailed recap, right here for you.

On tonight’s episode, Part 2 of 3, a reunion continues with Joseline in battle against her fellow cast members, both on the stage and off it. The group reflects on how the reunion could go so horribly wrong.

RECAP: Okay, so there are reunion fights and then there is the fight that went down on the set of Love & Hip Hop Atlanta. Joseline always seems to turn up everywhere ready to fight but at this taping, holy hell. Bezino and Stevie have been on the outs mainly because Joseline keeps slamming Zino’s love, Althea. As soon as all 4 sat down on stage it was on. Stevie and Joseline were ready to fight and Zino kept commenting about how they were messed up on cocaine. The fists started flying almost immediately and security couldn’t get things under control for quite awhile. Eventually Stevie and Joseline were kicked out and Benzino and Thea decided to leave the taping. The set was closed down and only the rest of the cast remained.

The next 15 minutes of the reunion is spent with the rest of the cast dishing on Stevie and Joseline- whether or not they have a drug problem. It is also thought that Joseline’s problems come from her insecurity and that fame is ruining her. Mimi and her friend Ariane are brought out and we then hear about an instance backstage where Joseline decked Mimi and grabbed her by the hair.Video rolls on that while Mimi discusses how Joseline wasn’t in her right mind. Nikko also explains that security kept him from Mimi and Ariane believes that Nikko should have found Mimi.

Now we move on to Tammy’s getting swung at by Joseline and I’m sorry but the moment where Tammy runs for the bottles to throw at Joseline to retaliate is kind of funny. Deb, Tammy’s mother-in-law also got involved and claims that Joseline’s strength was super human.

Deb demands that drug testing be a part of Love & Hip Hop: ATL in the future and the ladies then discuss how Joseline uses drugs to numb the pain of her past and that she needs real help to cope. We flash back to when Tammy and Joseline clashed over the season and it seems like Joseline is intimidated by every woman on the show.

It is officially confirmed that Stevie and Joseline really aren’t married and that Zino probably didn’t realize it when he put them on the cover of Hip Hop Weekly. At the same time everyone says that Benzino is old school, in your corner supportive. Every time they get away from Stevie and Joseline even for a second they end up circling back. This entire hour has been all about them. Tune in next week for the third part of the Love & Hip Hop: Atlanta reunion- when Stevie, Joseline, Zino and Althea are interviewed again.