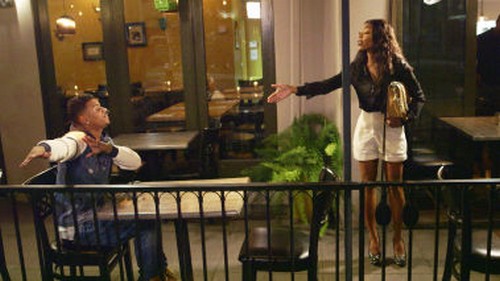 Tonight on VH1 their new series Love & Hip Hop Hollywood continues with an all new Monday November 10, season 1 episode 9. On tonight’s episode, it could be all over for Fizz and Moniece Slaughter.

On the last episode, Masika and Berg g0t close, angering Hazel; Ray J tried to move forward. Hazel confronted Masika about her history with Berg after finding some questionable Instagram posts of the pair. Even though Hazel started out the conversation trying to keep her cool, Masika responsed to her aggressively immediately and the talk just continued on a downward spiral. Did you watch the last episode? If you missed it, we have a full and detailed recap right here for you.

On tonight’s episode as per the VH1 synopsis, “after physically attacking Amanda, Moniece meets with Fizz to see what he thinks. What she finds out could end it all for them.”

The billboard is revealed with Masika on it, and she is pleased to see Nikki’s face when she realizes who is the face of her family’s business. Nikki comes up to Masika afterward, and confronts her about the fact that she didn’t say anything at the photo shoot, telling her she could get her off the billboard because she’s the boss.

Nikki is still upset with Teairra for working with Berg, and Teairra repeats that she has nothing to do with him. Masika says that Teairra doesn’t want Berg and Berg doesn’t want her (Nikki), and Nikki screams at her to shut up. She asks why she has everyone’s back and no one has her back before storming off.

Apryl and Omarion talk about Apryl’s relationship with her own mother after he commends her for her working out their problems. Apryl says she feels like she didn’t get enough love from her mom and doesn’t feel close to her. Seeing how much Omarion’s mom cares about him makes her question how much her own mom cares. Now that she’s about to be a mom, she needs to go to her mom to get answers to big questions about her own life and her father.

Soulja Boy and Nia talk about her father’s opinion on their relationship, and she says he needs to see something from him before he makes a decision on what kind of guy he is. He tells Nia they should put off moving together because he’s going on tour. Nia wonders if they ever will move in together after all, especially considering that every time he goes on tour their relationship takes a step backward when he returns. Nia tells him she will wait until he gets that but there can’t be any more games after that.

Ray J needs to release stress after his arrest, so he hangs out with Yung Berg and Sincere. He tells them about his arrest and how he feels he was wrongly arrested. Sincere says Ray J may be playing it cool, but he must be worried because of the heavy charges he is facing. Berg brings up working with Teairra and Ray J talks about the meeting they had when she showed up at the studio to talk to him.

Nikki meets with her mom at Panini Pizzeria to look at the billboard of Masika and get her help taking it down. Her mom asks why she’s obsessing about it, and Nikki says she doesn’t think it’s appropriate.

Nikki says that Masika seems to have an obsession with her because she’s there with every move she makes. Her mom then whips out Masika’s mugshots for shoplifting and petty theft.

Moniece and Drew meet up and she lectures him about Amanda’s unsuitability as a mother figure for her child. He says everything he does in his life will touch the child, and that he always has his best interests in mind. Moniece says she doesn’t want Amanda telling her that her feelings as a mother don’t matter and telling her what to do.

Ray J finds out he only has to go to anger management and probation, which he is extremely happy about as he had potential jail time ahead of him. He says he’s going to use this opportunity to get his life together and go down the right path, and that he’s learned his lesson.

Teairra takes Nikki out and tells her she has invited a third person. Nikki thinks Teairra has set up a blind date until Masika surfaces. Teairra tells them she just wants them to make up and put this behind them. Masika doesn’t care either way, but is there for Teairra.   Nikki tells Masika she can promote the strip club because at the end of the day, she’s making her richer.

Teairra is shocked that these two still can’t realize that the real problem in this situation is Mally.  Masika says she doesn’t care about judgments from a rich girl when she has lived on her own since she was young.  Teairra says a lot of people have mugshots and plastic surgery.

Nikki says she can replace the billboard with Masika’s mugshot, and Masika says she should buy the billboard and put her before pictures on it. Apryl’s water breaks and the whole family is downstairs. He and Apryl decided they don’t want anyone else in the same room as them besides the midwife. Ray J has to meet up with his father for advice after being told he is on probation.

His father says he thinks the anger management will be helpful. He tells Ray J that his mother is worried about him. Ray J says he’s sorry and doesn’t want to let them down, and that he wasn’t raised like this. He says that a lot of his issues have been due to relationship difficulties. He tells his father about how Teairra came to see him demanding an apology and closure, and his dad tells him that Teairra can’t help how she feels. Ray J’s mom likes Teairra and Ray J thinks she thinks they’re going to get back together.

Ray J says he feels bad because he has done things to Teairra out of vengeance and spite, and he needs to go back to her and get redemption.

His father says he needs to apologize to her.