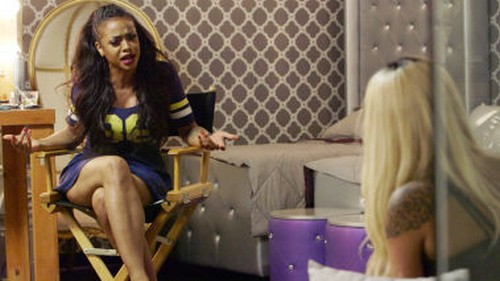 Tonight on VH1 their new series Love & Hip Hop Hollywood continues with an all new Monday November 3, season 1 episode 8 called “Dissed and Dismissed”. On tonight’s episode, Masika Kalysha and Berg start to get closer with one another.

On the last episode, a musical marriage was cemented between Teairra and Berg. Meanwhile, Hazel looked for Berg’s acceptance, and Soulja Boy faces Nia’s father. Did you watch the last episode? If you missed it, we have a full and detailed recap right here for you.

On tonight’s episode, Masika and Berg get close, angering Hazel; Ray J tries to move forward. Hazel confronts Masika about her history with Berg after finding some questionable Instagram posts of the pair. Even though Hazel starts out the conversation trying to keep her cool, Masika response to her aggressively immediately and the talk just continues on a downward spiral.

Berg sets up a special meeting for him and Teairra to celebrate their mix being finished. Teairra loves the song and couldn’t be happier.   Berg tells Teairra about how he saw Hazel, who is not happy they’re working together. Teairra tells him she never said any of this to her face and doesn’t appreciate her talking to him about it. She tells Berg they need to focus on their musical marriage because they are both talented, and ignore her.

Hazel goes to the gym with Masika to cool down from her fight with Berg, where he took her record back and threw her stuff into the street. She tells Masika what happened. Masika says that the two of them are close, which Hazel is surprised by as he never mentioned Masika to her like that. Masika shows Hazel photos from her photo shoot for the strip club, and invites her to the unveiling party for the billboard.

Fizz finds out that Amanda is cheating on her again after seeing her with another man, and goes to confront her. She says she was avoiding him because she knows he hates this guy, and it was an unfortunate coincidence that they pulled up right next to each other on the street. She tells him there was nothing to it and it’s just breakfast. “I’ve been dealing with Amanda’s inability to disconnect from this dude for too long,” he says. He asks her if she loves and wants to be with this guy, and she says she said she was sorry and wasn’t doing anything.

Teairra and Nikki talk about Masika and Mally. Nikki tells her about the fact that Mally lied to her, saying now she needs to move on with her life. Teairra tells Nikki about the special setup Berg made for her. Nikki says she’s in denial about him liking her, but Teairra says she needs to focus on her music right now. Nikki then invites Teairra to the billboard unveiling party.

Fizz says after the crap he’s had to deal with with Amanda, he has realized he’s been trying to hard to find someone to raise his son when his son already has a mother. He talked to Moniece about improving their communication issues. When Moniece asks him if Amanda is going to move into the house with him, he tells her they are on a break. Moniece refrains from saying anything negative because they’re working on their issues. Then, she asks him for financial help with her business, which he immediately ignores.

Masika meets up with Berg to talk to him about Hazel. When she tells him she’s been hanging out with Hazel, he says “stop that.” He tells her he was petty to empty Hazel’s purse out on the street during their fight. When asked about calling Teairra his boo, he says he knew that would get under Hazel’s skin and that Teairra is his boo. Masika tells him that she liked the track but calls Hazel’s verse “struggly.” ‘Yo, struggly is not the word,’ he says. ‘Stalkerish is more the truth.’ He tells Masika if she’s feeling the song she should take a crack at it herself. She says if he wants to try a track with her he can, but Hazel is going to start drama over it. Berg suggests taking an Instagram photo, and they take one with her on his lap and him kissing her neck.

Ray J meets up with Princess to talk about his arrest, saying he would pride himself on never being arrested. She tells him that he’s a good man, but he has these times when he goes off the deep end, and now it’s time to move beyond that. She tells him he needs to stop drinking, and he says alcohol is not the reason everything happened the way it did.

Amanda is upset about her separation from Drew and comes over to try and patch things up. She tells him she misses him and Cameron, and he says that he has no way of knowing she’s really done with that guy. She promises him that it’s over and all ties have been cut. He tells her he’s trying to figure out his life and has been talking to Moniece, who told him she wants to move in. Amanda finds it extremely disrespectful that all this has happened in the few days they’ve been separated. He calls himself a bachelor, and she says he is not from this moment. He tells her she has a lot to prove before she can tell him he’s not a bachelor again.

Masika is getting ready for the billboard unveiling party, and Hazel comes and immediately confronts her about the Instagram photos with Berg. Masika tells her half the photos are from before she even knew Hazel knew Berg. Masika asks her if she cares more about the pictures or the fact that Berg doesn’t want her. She decides not to tell Hazel about the song Berg took from Hazel and gave her, keeping that nugget to herself. She tells Hazel, as her friend, that she is delusional and needs to let it go. She also tells her that she sounds dumb coming at her about a guy she doesn’t even want. “Good luck with Berg, sweetie,” she says as Hazel walks away.

Moniece is getting on Amanda’s last nerve, and texts her to meet up. Moniece has no idea what Amanda could possibly want from her as Drew is not with her, but decides to be a nice girl and show up so she can’t be called out for ignoring her. She tells Amanda that she is concerned about her commitment problems and the instability in their relationship, saying every time she breaks up with Drew she is also breaking up with the kid. Amanda says that Moniece doesn’t take care of Cameron on a daily basis and that sometimes she is delusional. Moniece lunges across the table and grabs Amanda, and is then escorted out by security. As she is being taken out, Amanda yells at her to be a good mother.