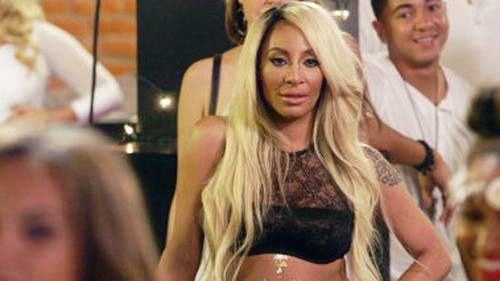 On the last episode, after physically attacking Amanda, Moniece met with Fizz to see what he thought. What she found out could end it all for them.. Did you watch the last episode? If you missed it, we have a full and detailed recap right here for you.

On tonight’s episode as per the VH1’s synopsis, “things go sour when Hazel E crashes Yung Berg’s birthday party and disrupts the proceedings.”

Omarion and Apryl have had their son. Omarion says he named him Mega because “that’s exactly what this is,” saying he didn’t know he could love someone so much so fast.  Omarion’s mom appreciates Apryl despite her previous concerns about Apryl not being ready for motherhood.

Apryl says she’s the happiest she’s ever been in her life and is surprised to find Omarion’s mom so supportive, especially as her mom is not around. Apryl’s mom doesn’t show much affection to her kids.

She tells Omarion’s mom that part of the reason their conflict was so difficult was because she felt abandoned by her real mom already and was hoping she could play that role for her during this pregnancy.  Her mom is coming in a couple of days, and Apryl needs to know if she is going to be fully involved in Mega’s life. Otherwise, she won’t be able to be involved.

Nia and Morgan spend some time together to talk about all the things going on in their lives. Morgan tells her about being fired again by Ray J. She says she doesn’t want to talk to Ray J because she never knows which version of him she’s dealing with.  Nia reveals that she thinks she’s pregnant and hasn’t yet told Soulja Boy.  She took a pregnancy test and it read positive, she just hasn’t accepted it yet.  She’s stressed out because he is currently in Brazil and doesn’t respond to all her texts. Morgan tells her to Facetime him and tell him.

Masika is happy to take Nikki’s “repossessed” song after how Nikki acted at the billboard reveal party.   She and Berg meet up to work in the studio, and they talk about his upcoming all-white extravaganza. He says he invited Hazel to it and wants her to see him there with other women so maybe then she’ll take the hint. Masika tells him about how she is still getting jealous and calling him her man, which makes him burst into laughter. Masika climbs into Berg’s lap and tells him they should go to the party together.

Berg is having the time of his life with “the most beautiful girl in the world,” Masika, and couldn’t care less about Hazel. If anything, he hopes she sees them together.

Hazel is at the party with Ray J, who ‘may be the only homie she has left.’ She says she wants everyone to take a seat back and stay 100 feet away from her, especially Berg and Masika, who he is “slobbering” on.  Hazel tells Ray J about how Berg hurt her, and Ray J understands, but wants her to be the bigger person. He also wants to be the bigger person himself tonight by making up with Teairra.

Berg goes up to the stage and calls up Masika. He says he loves her, and she says she loves him too.  Masika wishes happy birthday to Berg, mentioning that she is his date. She says although it is Berg’s birthday, he actually gave her a gift… and unveils the record of Hazel’s old song that she recorded. Hazel starts singing the song out loud to humiliate Masika, bringing the performance to a halt. Masika starts laughing.

Hazel confronts Berg about the record, and he says she tried to get violent with him. She says she thought they were friends, and he says he’s pretty sure their friendship went out the window with her purse.   After he leaves, Masika comes up to Hazel and asks repeatedly why she’s being so rude. Hazel asks her if she was not there in the studio when she was recording that song.

Teairra also wedges herself in the conversation, and before long Sincere also walks up. Teairra starts yelling at him about why he’s rolling up in this conversation, and he says they’re disrupting the event with this fight.

Hazel has realized that Teairra was right when she was warning her about Berg for the last few months. Ray J interrupts them mid-conversation to pull Teairra aside so he can make amends. She begrudgingly agrees to talk to him in private.

Nia decides it isn’t fair to wait until Soulja Boy gets back to tell him she’s pregnant, so she video chats with him, but he’s surrounded by people and can’t talk.

Teairra and Ray J go outside to talk, and he says that some of the things he’s done don’t reflect who he is and how much he cares about her. He was wrapped up in things other people were telling him, such as rumors Teairra was talking about his girlfriend. She says she never talked about her until she was dragged into it and she’s over this.

She tells him to have a happy life, and she says she knows he isn’t happy. She knows he fights with her and others and he’s in trouble with her because she found condoms in his bag.

Ray J is shocked that Teairra suddenly flipped the script and started pulling out information no one knows. He immediately thinks Morgan is involved.

Berg and Masika leave the party together, and he starts getting into her more after he helped her own Hazel.   They lay on the bed and he tells her he has never felt so close to someone who was a friend, and he wants to date.  Masika says she knows what he is like and she doesn’t want to go around looking delusional when he openly ‘has a different woman every day of the week.’  He tells Masika he would break up the love pentagon for her, and she says she thinks they should give it a try.

Apryl’s mom has come over and she loves Mega, but she doesn’t want to leave him alone with her because she was never affectionate toward her.
Her mom starts crying and says Apryl gets angry whenever she tries to help. Apryl is angry that her mom is victimizing herself, and reminds her of how neglectful she was as a parent.  Apryl is still angry because she doesn’t know why she gave all her kids up, and is angry because her mom’s return actually made her life worse.

She’s also angry because her mom won’t tell her about her own past or her mom’s relationship with her dad.  She looked up her dad on her own and found out some disappointing information, and now she feels lied to because she was never told.   She gives her mom an ultimatum, saying she needs to be completely honest or not do this at all.

Teairra decides she can’t keep going back and forth with Ray, so she meets up with his mom for advice.   She tells his mother that she’s invested so much into their relationship, and asks why he treats her the way he does. His mom says she isn’t always on his side, and she knows he is capable of being loving.  Teairra tells her about how Ray isn’t happy, saying she’s concerned about his unusual behavior.

His mom says if they are meant to end up together they will and she can’t force someone to want to be with her, so she should focus on herself.  Teairra admits she’s been giving Ray more of herself than she should.

Nia has a miscarriage, and is depressed that she’s at home having a miscarriage and he is in Brazil doing whatever he wants. She says she’s trying to be an adult and understand that he’s doing his job right now, but it’s times like this that she needs him.

Ray J ‘knows’ Morgan was the one who told Teairra all those things about his relationship, and he meets with her to talk.  He asks her if she doesn’t want him and Princess to be together, accusing her of talking to her about him. She is appalled at the accusations and laughs because Princess is the one who allegedly comes to her and tells her stuff.

He says he doesn’t trust her, she isn’t family to him and she’ll always be alone. They scream at each other as they leave the restaurant.