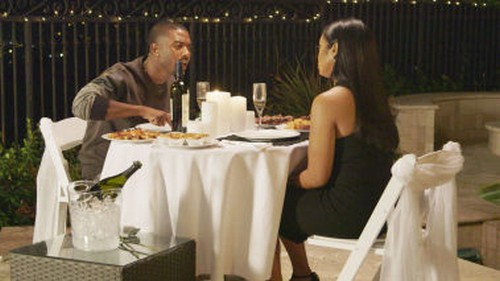 On the last episode, things went sour when Hazel E crashed Yung Berg’s birthday party and disrupted the proceedings. Did you watch the last episode? If you missed it, we have a full and detailed recap right here for you.

On tonight’s episode as per VH1’s synopsis, “Ray J lets of princess, literally. When push comes to shove, Ray J knows how to end relationships.”

Nia thinks she and Soulja Boy may be broken up after she texted him saying he doesn’t care and he blocked her on Instagram.   She tells Morgan about her miscarriage, saying one minute she’s fine and the next she’s crying. She also says she doesn’t know if she actually would want to have a baby with him.

Hazel says she’s still going to make a hit even though Berg took her song and gave it to Masika. Her manager tells her she needs to get over the Berg situation and focus on her music. However, he says Teairra is a different story and she agrees, saying she is going to try to make up with her.

Teairra has another surprise for Nikki. This time, she is trying to hook Nikki up with Fizz. The two of them hit it off immediately. Nikki tells him about Masika and she tells him about Amanda.  Teairra talks about how Ray apologized to her at the white party, saying she is unsure if she wants to forgive him because of how bad his behavior was.

Ray J meets up with Brandy to talk about everything that’s been happening in his life. She tells him that he is the problem because he puts himself in situations where the worst in him comes out. He tells her about how his mom is worried about his environment and still loves Teairra. Brandy agrees, and Ray J knows they both love her and so does he, but he says their relationship just wasn’t working out at a point. He says he also knows that Brandy and his mom hate Princess, but he loves her. He tells Brandy he loves Princess and she asks if she seriously loves her to where he wants to spend his life with her. He says the only thing coming between them is Morgan putting things in her ear.

When he tells her Morgan has been fired, Brandy tells him that all the women in his life are talking to eachother and he can’t trust any of them. She says Princess is hearing something from someone and it will result in public shenanigans. Ray J doesn’t agree.

Apryl is stressed out that her becoming a mom didn’t make her closer with her mother. She tells Omarion about it and he says she is dealing with things in her life and she can’t help Apryl until her own issues are solved.

Fizz wants to have fun now that Amanda is out of the picture, so he meets up with Nikki. They make a toast to new beginnings. Nikki is tired of Mally and ready to have fun with Fizz.

Nikki says she doesn’t know about dating guys in the industry because they aren’t faithful, and Fizz says he isn’t like that and his son is his priority. Nikki asks about his relationship with his son’s mother, and he says she meddled too much in his relationship and doesn’t seem to be over him.

Soulja Boy texts Nia to talk to her after everything that happened. She begrudgingly comes and tells him that he seemed like he didn’t even care. He says he went through something too and it was disrespectful of her even to ask if he cares.

He says he has responsibilities to handle and Nia signed up for this life by being with him. Then he says he’d rather shut down on her than on his fans.
She starts crying, telling him he should have had time for her since she was pregnant.

Hazel reaches out to Teairra to make up. Teairra tells her Berg was never her mad, but she says “Berg plays a part in my delusion.”  Teairra says she should have told her that she needed to move out, and that people were telling her Hazel was going around saying things about her.

Hazel tells her she almost wants her not to do the record with Berg, which Teairra says is ridiculous. Teairra says the record speaks to her and she hates that she would base them moving forward on her not making this record. She says if those are her terms then bye.

Drew has texted Moniece to meet up and she’s pretty sure she already knows why: because she’s been giving interviews saying negative things about her relationship with him.

Moniece says although everyone seems to think she was the only reason they broke up, he played a large part in it which needs to be acknowledged.  Fizz says it’s wrong of her to portray him in a false and negative way by claiming he abused her when he didn’t because they are a family. He also says she shouldn’t play the victim and put it all on him.

Moniece says he can’t handle it, but what she has said was true. She also doesn’t know why he deserves a cookie for doing his job by taking care of their son when she isn’t able to.

He tells her all he does with Cam is take selfies, asking why she doesn’t have a place. Fizz says Moniece is a pathological liar and they and God all know the truth about what happened.

Ray J sets up a date to talk to Princess about the issues that have been going on. He tells her that problems between them are easily resolved and over the next day, except when she turns around and goes to tell other people about it.

She says she considers Morgan family, but he says she is foul. Princess tells him he was the one who introduced her into her life, and Ray J says he doesn’t want Princess to talk to her.

She says maybe he shouldn’t have introduced them in the first place then and asks why Morgan was in their house and watching their dog then. Ray J says maybe it’s best they separate, and she starts throwing food at him. They get up and he pushes her into the pool. She gets out and begins to chase after him.