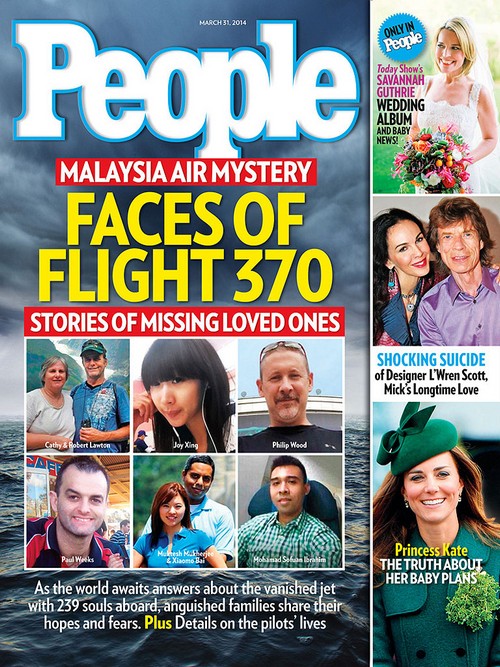 It’s now Day 12 in the search for the missing Malaysia Airlines flight, and nobody’s feeling the wait more than the anguished and devastated family members of the missing passengers. It’s one thing to know that the plane crashed and receive closure on the matter, but imagine having to wait and wait, clinging to the tiny hope that their family might still be alive?

It’s what the families of the missing passengers have been doing, and in the latest cover issue of People Magazine, they share their stories. Subaramaniam Guruswamy, whose 34-year-old son was on the flight, echoes the frustration felt by others in his situation, telling People, “It’s really too much. I don’t know why it is taking so long for so many people to find the plane. It’s 12 days. He’s the one son I have.”

New Zealander Paul Weeks was reportedly headed to his dream job, leaving behind his wife, Danica, and their two young sons. Philip Wood, another missing passenger, has left behind a girlfriend desperate to see him return. She recently posted on Facebook, “Each night I say goodnight to your soul on the pillow next to me. Can you hear me? Please please please come home baby.”

Then, there’s Muktesh Mukherjee and Xiamo Bai, who were returning to their young children after going on a romantic getaway together.

So far, absolutely no remnants from the plane have been found, although investigators are starting to refocus their search towards the South Indian Ocean. There are a lot of theories as to what happened to the plane, and a lot of the attention has been focused on the pilots and their personal lives. But unfortunately, until the plane and its black box are found, these people will never find the closure that they need to move on and recover from this terrible tragedy.

Although the Malaysia Airlines news has dominated headlines this week, there has been some celebrity news that managed to register. Savannah Guthrie reveals her wedding album and baby news in this issue of People. There’s a featured story on the suicide of fashion designer L’Wren Scott. And then finally, we find out the ‘truth’ about Kate Middleton‘s future baby plans.