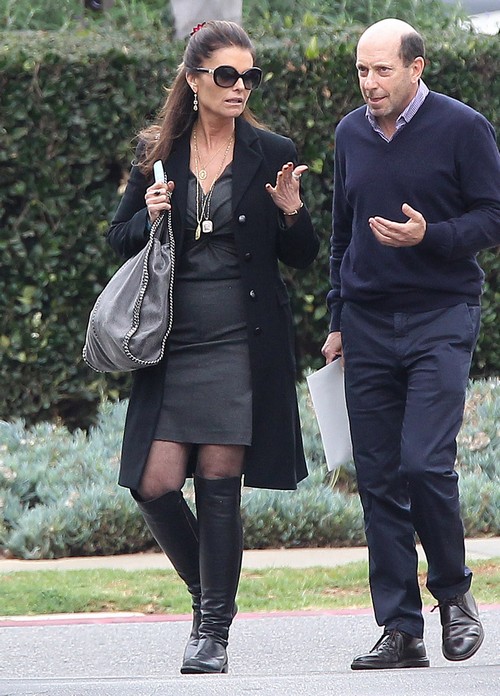 It’s been more than two years since Maria Shriver broke off her marriage to Arnold Schwarzenegger, but only a few months since Maria’s been linked to Republican strategist Matthew Dowd. But has she already gone and gotten herself a new boyfriend? Maria was spotted having lunch with a mystery man at Tavern Restaurant in Brentwood earlier today, and he definitely bears a passing resemblance to Dowd. Either they’re the same man, or Maria definitely has a type.

Maria and Dowd were first spotted together in Georgetown last fall, and sources told the Washington Post that they had been seeing each other for a few months. It’s possible that Maria has many bald, male friends in their fifties, but it’s also possible that this mystery man is her new boyfriend.

Since the whole debacle with Arnold, Maria has been making sure to keep quiet about her private life, apart from the random interview here and there. She’s rarely spotted in public anymore, and she makes a concerted effort to stay away from paparazzi hotspots and major media events. Can you blame her though? She was with Arnold from 1977, and she divorced him after being humiliated in public. That kind of betrayal isn’t easy to bounce back from, so kudos to Maria for seemingly managing it with grace and humility. And hey, if this new man is her boyfriend, good for her.  She deserves someone who will make her happy and who won’t cheat on her the first chance that he gets.